Two Nigerians emerged victorious in the US election

Two Nigerian-Americans emerged winners in the 2020 United States general elections.  Adeoye Owolewa emerged victorious at the federal level, a shadow member of the United States House of Representatives from the District of Columbia. Esther Agbaje will represent District 59B in the Minnesota House of Representatives on the platform of Minnesota Democratic-Farmer-Labor Party, an affiliate of the US Democratic Party

An indication of general acceptance and public trust, Owolewa and Agbaje secured 82.65% and 74.7% of the total votes cast respectively.

The election of Owolewa and Agbaje, 31 and 35 years respectively is a testimony that Nigerian youths are capable of being trusted with the position of authority.

Adeoye Owolewa is a Nigerian born American politician, pharmacist, and a member of the Democratic Party. He is the grandson of Phoebe Ajayi-Obe, a late senior advocate of Nigeria. His father hails from Omu Aran in Kwara State and his mother is from Ibadan in Oyo State. Oye was born and raised in Boston, the fourth in a family of five children. He attended Boston Latin School and graduated in 2008. In 2014 He earned a PhD in Pharmacy from Northeastern University and thereafter moved to Washington to practice pharmacy. In 2018 he became an Advisory Neighborhood Commissioner of District 8E01

Esther Agbaje a Nigerian-born American is a graduate of Harvard Law School specialized in public interest law in the areas of infrastructure, energy, housing, and civil rights. 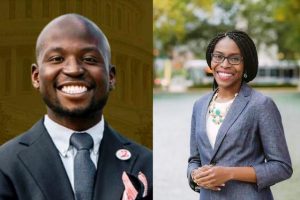