Gov. Hope Uzodimma of Imo has called for the revival of the Palm Oil Industry in Nigeria. He spoke on the potential of the industry to raise the level of employment in Imo State, according to him the state’s Palm Oil Producing Industry, ADAPALM, could employ about 35,000 people if fully revived.

Nigeria was the leading Palm Oil producer in the world before it’s complete dependence on crude oil started in the 1970s.

According to a report by PwC Nigeria, “Palm oil is of strategic importance to Nigeria as it is used in the production of more than half of the products sold in supermarkets globally”.

“Nigeria is the largest consumer of palm oil in Africa with a population of 197 million people (World Bank, 2018). The nation consumed approximately 3 million MT of fats and oils in 2018, with palm oil accounting for 44.7% or 1.34 million MT. In the same period, production stood at 1.02 million MT resulting to supply shortfall of 0.32 million MT (excluding the possible impact of palm oil exports)”

The report stated that “In the early 1960s, Nigeria was the world’s largest palm oil producer with a global market share of 43%. Today, it is the 5th largest producer with less than 2% of the total global market production of 74.08 million MT. In 1966, Malaysia and Indonesia surpassed Nigeria as the world’s largest palm oil producers. Since then, both countries combined produce approximately 80% of total global output, with Indonesia alone responsible for over half i.e. 53.3% of global output. According to the Central Bank of Nigeria (CBN), if Nigeria had maintained its market dominance in the palm oil industry, the country would have been earning approximately $20 billion annually from cultivation and processing of palm oil as of today”.

The Imo State governor, while on an assessment tour to inspect the state of affairs in the industry, said the industry, if revived, would help the state government in facilitating industrial growth, harmony, expansion, and increased productivity.

Uzodinma said he was happy that production had resumed once again at ADAPALM and that 120 tonnes of Grade A palm oil was being produced daily. He expects the development to boost the Internally Generated Revenue of the state.

He noted that the company was a value chain that could produce not only palm oil but also other oil-related products like margarine, sheer butter, and palm kernel oil, among others. 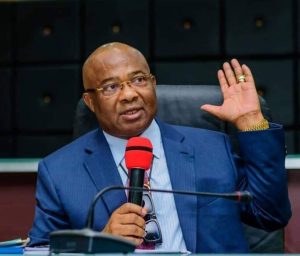 The governor expressed his commitment to bringing ADAPALM back to the stream. “it’s one of our greatest hopes of surviving the post-COVID-19 era. The economy is almost becoming epileptic. We have to look inward to see how best we can restructure our economy, boost Internally Generated Revenue (IGR), and then ensure that our citizenry is also busy.”

Uzodimma appealed to the people to have patience with his administration as it made an effort to fix the access road to the oil palm plantation and other oil installations in the area which was in deplorable condition.