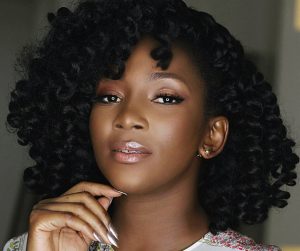 Nigerian Music Star Niniola receives Grammy nomination certificate for her work as a composer on The Lion King: The Gift.

Niniola Apata has received her Grammy nomination certificate for her work as a composer on The Lion King: The Gift. Popularly known professionally as Niniola, she describes her style of music as Afro-house, a blend of Afrobeat and house music.

The Nigerian singer and songwriter participated in the sixth season of Project Fame West Africa in 2013. After releasing her debut single “Ibadi” in 2014, she was nominated for Most Promising Act to watch at the 2015 Nigeria Entertainment Awards.

In 2019, elements of “Maradona” were sampled in “Find Your Way Back”, a song from Beyoncé’s soundtrack album The Lion King: The Gift. Niniola is also credited as a songwriter and composer on the track.

Osinachi Joseph (née Kalu), known professionally as Sinach, has made history to become the first African to top Billboard USA Christian songwriter chart, the music industry standard record chart for songs published weekly by Billboard magazine.  Her song Way Maker, according to the data released in May, has dominated the chart for the past seven weeks. Chart ranking is based on sales, radio play, and online streaming in the United States.

The Proudly Nigerian singer and songwriter has released other gospel hit songs, including “I Know Who I Am”, “Great Are You Lord”, “Rejoice”, “He Did It Again”, ” Precious Jesus”, “The Name of Jesus”, “This Is My Season”, “Awesome God”, “For This”, “I Stand Amazed”, “Simply Devoted” and “Jesus is Alive”.

In March 2019, the visuals for “Way Maker” became the third Nigerian video to garnered 100 million views on YouTube behind Davido’s “Fall” and Yemi Alade’s Johnny”. “Way Maker” has been covered by multiple Christian artists such as Michael W. Smith, Darlene Zschech, Leeland, Bethel Music, and Mandisa. In September 2019, Sinach became the first gospel artist from Africa to tour India, headlining concerts with several thousand in attendance.

Osinachi Kalu, Born30 March 1973 in Afikpo South, Ebonyi State, Nigeria. She started singing for family and friends in 1989 as a hobby while working as a staff and choir member in Christ Embassy Church.

She studied Physics and graduated from the University of Port Harcourt, Rivers State, Nigeria. She considered relocating from Nigeria after her University education but was advised against it by pastor Chris Oyakhilome.

As a child, Sinach stated she had dreams, where she saw herself singing to large crowds, but didn’t actively pursue anything musically as a career besides joining the choir and also working as an administrative staff in the Church. Sinach had written many songs before she released her first album, Chapter One in 2008. Her song ‘This Is Your Season’ won the Song of the Year award in 2008.

Speaking on how she came by her stage name Sinach, she said: “I chose that from my name Osinachi because it is easy to pronounce and catchy”.

In 2016, Sinach was the first recipient of the LIMA Songwriter of the Decade Award, recognizing her contribution to gospel music in the previous decade. Her songs were being sung in many countries, translated to many languages, around the world. That same year, she received the African Achievers’ Award for Global Excellence. Also that same year, for the second time in a row, she won the Western Africa Artist Of The Year by Groove Awards in Kenya and was listed by YNaija alongside Chris Oyakhilome, Enoch Adeboye as one of the Top 100 Influential Christians in Nigeria.

As a songwriter, Sinach has written over 200 songs and won several awards. Her song ‘This Is Your Season’ won the Song of the Year award in 2008. One of her most popular songs is ‘I Know Who I Am’.

At MINA-Online, as part of our Advocacy for Made-In-Nigeria, we will be profiling some great proudly Nigerians as our Ambassador of the week. The idea is to celebrate our living Ambassadors, projecting the best of Nigeria to the world. We understand that the world is readily available to report our negatives, we must make a conscious effort on our part to project your positives to the world.

Our Made-In-Nigeria Ambassador (M-I-NA) of the Week is no other than Innocent Ujah Idibia (born in Jos, Plateau State, Nigeria), known by his stage name 2Baba, is a Proudly Nigerian singer, songwriter, record producer, entrepreneur, philanthropist, humanitarian, and activist.

He is one of the most decorated and successful Afro pop artists in Africa and is also one of the most bankable performing music artistes in Africa. With over 2 decades in the industry, 2Baba remains influential in the Nigerian and global Entertainment space.

A true Made-In-Nigeria Ambassador, 2Baba has also been an ambassador for quite a number of brands including the National Agency for Food and Drug Administration and Control.

Following the release of his debut album, he released his second album Grass 2 Grace in 2006, which contained hits “One Love”, “True Love, “4 Instance”. He is the founder of Hypertek Entertainment.

In 2006, his song “African Queen” was used in the soundtrack for the film Phat Girlz, which was released internationally.

He is part of the Sony All African One8 Project alongside seven other musicians across Africa recording a single with R. Kelly and Prince Lee titled “Hands Across the World”.

He is the first non-Liberian to become an honorary member of the Liberian music society in recognition of his outstanding contribution to the growth of music in Africa. He has been named Red cross ambassador society of Nigeria. 2Baba has several collaborations all over the globe, giving his collaborators the opportunity to win any awards for each duet such as street credibility by 9ice, possibility by p-square, and lots more. He is adored by his colleagues and every entertainer in the Nigerian music industry as a role model. 2Baba and heavyweight American Rapper Jay Z met in NYC 2014.

In 2009, he was presented with the prestigious International Youth Ambassador for Peace Summit and the Nigeria Youth Merit Award by the National Youth Council of Nigeria in recognition of his contributions to youth development in Nigeria.

In January 2017, 2Baba announced a partnership with United Nations High Commissioner for Refugees (UNHCR). He made an initial donation of over US$11,000 to UNHCR for IDPs and returnees. In June 2017, he released a dedicated IDP-awareness song titled Hold My Hand to mark the World Refugee Day and promised 60 percent of the proceeds from the song to the IDP cause. He has also collaborated with other NGOs like The Nigerian RedCross Society, Enough is Enough (EiE)(Office of the Citizen campaign), Youngstars Foundation, and National Democratic Institute (for Vote Not Fight campaign).

In May 2016, 2Baba received an honorary Master of Arts in Music degree from Igbinedion University, Okada, Edo State, Nigeria.

In March 2019, he was awarded an honorary fellow of the school of music by the Music Department, Obafemi Awolowo University. This made him the pioneer recipient of the award which was presented to him at the first public lecture and fellowship award, held on the 20th of March 2019.

@MINA-Online we celebrate our  Made-in-Nigeria Ambassador of the Week Innocent Ujah Idibia ( 2Baba).