Oshoala scored 20 goals in 19 appearances to celebrate her first league title in Europe with Barcelona, after the previous playing with Liverpool and Arsenal in England.

She celebrated on her Twitter Asisat M.O.N @ AsisatOshoala “21 games played, 19 won, 2 draws, 0 defeat, 86 goals for, 6 goals against. Top of the league since game day 3. I’m just gonna say we have the best team @FCBfemeni, congratulations my queens, ever working for the technical crew, fans all around the world. WE MADE IT! CHAMPIONS 19/20.”

The Barcelona women’s team claimed the Spanish Primera Iberdrola title for the first time since 2015 after the club executives endorsed the decision of the Royal Spanish Football Federation (RSFF) to cancel the 2019-20 season due to the coronavirus pandemic on Friday, May 8, 2020.

Following the cancellation, Barcelona won the league with 59 points from 21 matches and without losing a game to become the fifth team to achieve such a feat.

The 25-year-old has previously won league titles twice with Dalian Quanjian in the Chinese Women’s Super League and the latest her third since moving abroad in 2015.

The four-time African Women’s Player of the Year winner, who won the Copa Catalunya last August and Super Women’s Cup in February, took to social media to celebrate her latest feat.

Asisat Lamina Oshoala MON (born 9 October 1994) found success as a forward for Nigeria’s youth teams but made most of her early appearances for the senior national team as an attacking midfielder.

A celebrated Nigeria striker, Oshoala was named the best player at the 2014 FIFA U-20 Women’s World Cup and was the top goalscorer at the tournament with seven goals. She was also named best player and second top goalscorer with the Super Falcons team who won the 2014 African Women’s Championship. She also won the BBC Women’s Footballer of the Year 2015.

In September 2014 Oshoala was made a Member of the Order of the Niger by President of Nigeria Goodluck Jonathan. On 8 June 2015 in Winnipeg, Canada, Oshoala opened her senior FIFA Women’s World Cup account by scoring Nigeria’s second goal in a 3–3 draw with Sweden. Oshoala was also a member of the Super Falcons team who won the African Women’s Championship in 2016 and 2018. She scored three goals in the 2018 Edition in Ghana.

At MINA-Online, as part of our Advocacy for Made-In-Nigeria, we will be profiling some exemplary Nigerians as our Ambassador of the week. The idea is to celebrate our living Ambassadors, projecting the best of Nigeria to the world. We understand that the world is readily available to report our negatives, we must make a conscious effort on our part to project your positives to the world. 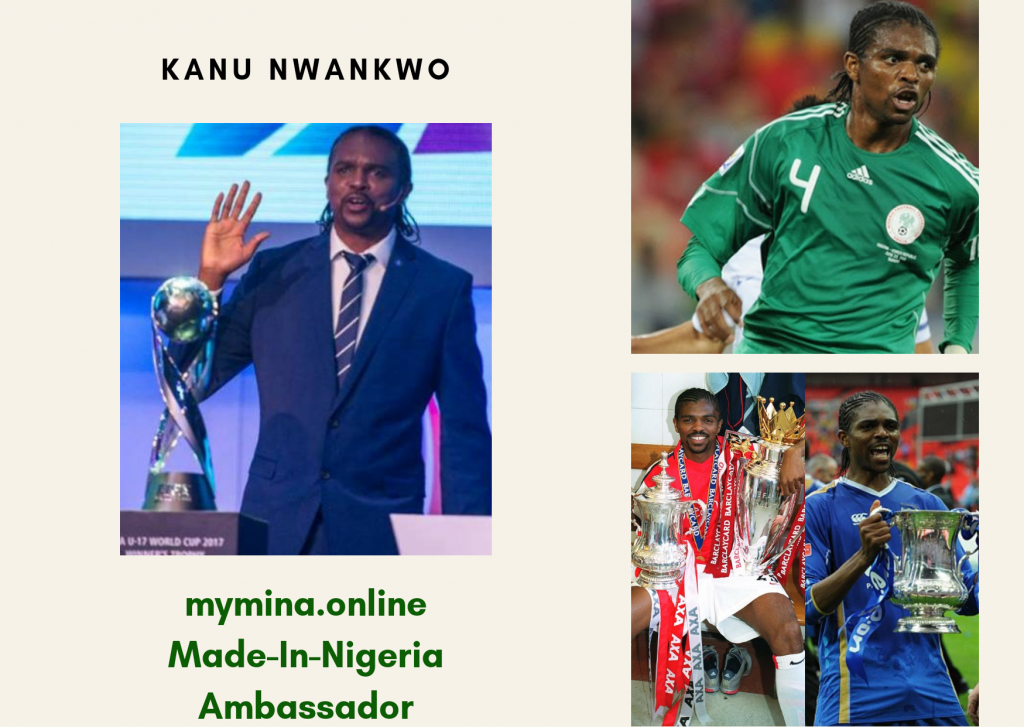 Our Made-In-Nigeria Ambassador (M-I-NA) of the Week, Nwankwo Kanu OON (born 1 August 1976) was a member of the Nigerian national team.

He is regarded as one of the best players in African football history. Kanu played for Nigeria’s Iwuanyanwu Nationale, Dutch side Ajax, Inter Milan of Italy, and English club Arsenal, West Bromwich Albion and Portsmouth.

A born winner and proudly Nigerian, Kanu won a UEFA Champions League medal, a UEFA Cup medal, three FA Cup medals, and two African Player of the Year awards amongst others. He is one of few players to have won the Eredivisie, Premier League, FA Cup, Champions League, UEFA Cup, UEFA Super Cup, Intercontinental Cup, an Olympic Gold Medal, and FIFA U-17 tournament.

Kanu is a member of the “Invincibles”, the Arsenal side that finished the 2003–04 season of the Premier League undefeated. Popularly known as Papilo, it is worthy of note that his transfer to Arsenal FC attracted lots of Nigerian football fans to the English Premier League. He played 197 games for Arsenal, scoring 44 goals including a memorable hat-trick in fifteen minutes against Chelsea to turn a 2–0 deficit into a 3–2 victory. 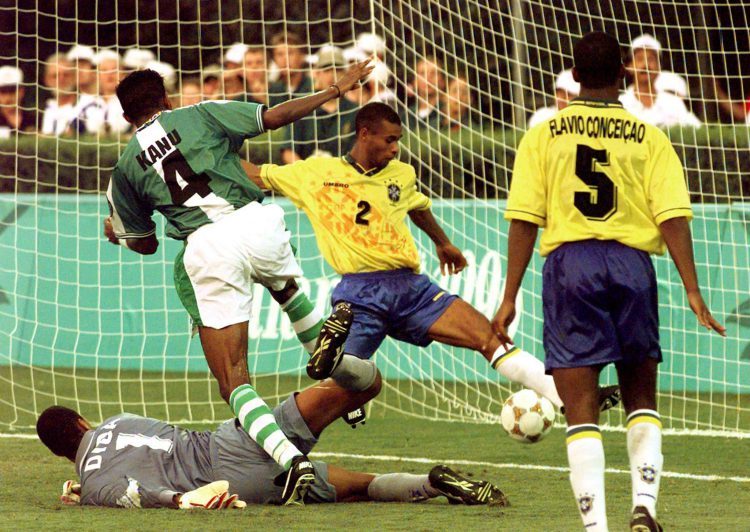 Kanu played for the Nigerian national team from 1994 to 2010,  he won 86 caps and scored 13 goals for his country, a world cup veteran, he participated in the 1998, 2002 and 2010  FIFA World Cups. He is greatly remembered for his exploit in winning the Olympic gold in the football event at the 1996 Olympics in Atlanta, where he scored the winning goal in the 4–3 semi-final win over Brazil, his second goal of the match.

Never giving to the setback, he underwent surgery in November 1996 to replace an aortic valve and return to his club, Inter Milan in April 1997.

A true Made-In-Nigeria Ambassador, he is also a UNICEF Goodwill Ambassador and African brand ambassador for digital TV operator StarTimes. He is also the owner of Kanu Sports TV, an Internet Sports Television which position to be the first indigenous sports TV in Nigeria, Kanu Sports Television. As part of his contribution to the society, he founded the Kanu Heart Foundation, an organization that helps predominantly young African children who suffer heart defects and whose work was expanded to provide aid for homeless children in 2008.

@MINA-Online we celebrate our Made-In-Nigeria Ambassador of the Week, Kanu Nwankwo OON.