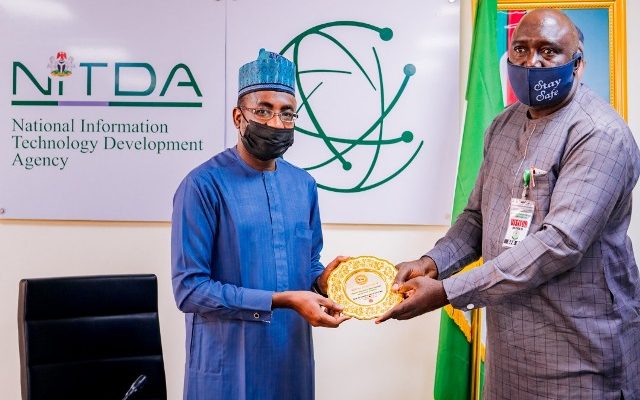 M-I-NA Blog- The Director General, National Information Technology Development Agency (NITDA), Kashifu Abdulahhi on Wednesday announced that to achieve Digital Transformation in Nigeria, there is need to efficiently use of the vast opportunities embedded in the space technology ecosystem, according to

Speaking at the corporate headquarters of the agency when he met with delegates from the Nigerian Institute of Space Engineers (NISEng) led by its National Chairman, Engr Dr. Okpanachi George, who came to seek for possible collaboration with the agency, the NITDA boss said  that it was a good development for Federal Government agencies to partner with private organizations, adding that NITDA as the regulator of IT in the country had put in place, policies and created an enabling environment for producers and professionals to come in and create innovations which will sustain a digital Nigeria.

He further stated that contrary to beliefs that satellites were obsolete, “emerging technologies is now transforming the Space technology ecosystem which will evolve a new chapter and give rise to enormous transformation in the industry.”

Abdullahi said that the agency was excited to partner with the NISEng because he believed the collaboration will drive innovations, as the “space technology ecosystem is everywhere and encompasses different sectors like the Communications, Agriculture and Security.”

The DG added that capacity building “is an important factor in research and development and the agency will give its support in capturing all demography especially the young start-ups in order to create a robust local content which will prepare and position the country for the Fourth Industrial Revolution.”

He said the agency was really looking forward to the collaboration because he believes the two organizations will exploit all possible innovations, ideas and commercialize them which in turn will consequently transform NISEng into a competitive, globally standard institute and sustain a digital Nigeria as a whole.

Earlier in his remarks,  Engr Dr. Okpanachi thanked the NITDA DG and management staff for taking time out of their busy schedule to receive them.

He said he had been following NITDA’s activities for some time and was greatly marveled at the agency’s dynamism and passion in sustaining a digital Nigeria.

He particularly thanked the DG for sending a representative to the institute’s 10th National Conference and Annual General Meeting in the previous year and seeks a further and deeper collaboration with NITDA on programmes that are insightfully valuable for national and professional development.