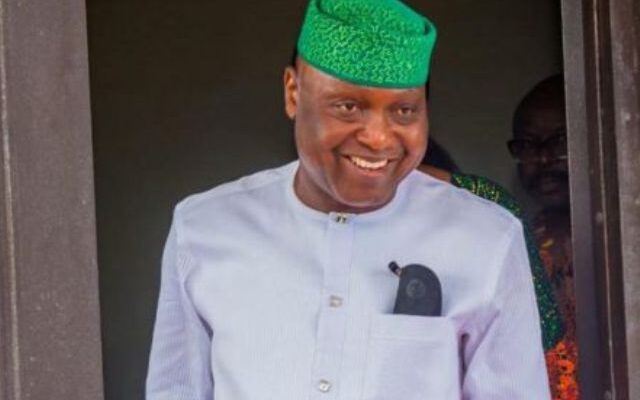 Ekiti State Governor, Mr Biodun Oyebanji has urged Ekiti people and Nigerians in general to embrace peace, unity and love for one another this year, stressing that development thrives better in a peaceful atmosphere.

The Governor stated this on Tuesday during the 2023 inter-religious thanksgiving service held at the Obafemi Awolowo Civic and Convention Centre, Ado Ekiti marking the first working day of the year. Citing the harmony displayed by the Christian and Muslim choristers as well as clerics at the service, Governor Oyebanji said it was obvious the state and country can achieve much more through unity and love.

“I don’t know if anybody noticed the fact that when the Muslim choir was ministering in songs, it was the Christian instrumentalists that bet the drums. And when the Muslim choristers was about mounting the stage, they were also dancing to the Christian music. This shows that if we love one another and are united in our purpose, our state and indeed our country can achieve a lot.”, the Governor said.

Speaking further, Oyebanji said with less than 100 days in office, he had been able to demonstrate the needed capacity to confirm that he would deliver on the six pillars of his development agenda.

He also thanked labour unions in the state for showing maturity and understanding with government, saying he is irrevocably committed to resolving all issues relating to labour in the State.

The Governor called on staff of the State owned University and the Teaching Hospital not to regard industrial action as a veritable tool for settling labour matters, stressing that strikes or resorting to blackmail would not resolve any matter but would only aggravate them.

Speaking in their separate sermons at the service, Bishop of Ekiti Anglican Diocese, Rt. Rev’d Olusola Ajayi and the ADS Missioner of Ekiti State, Alhaji Abdulsalam Babatunde called on the people of the state to embrace peace and show understanding with the Governor on the task of governing the state.

Bishop Ajayi, who urged residents to cooperate with the Governor to enable him achieve the desired progress, peace and economic viability, stressed that we must not allow politics and religion must not separate us from achieving greatness as a state.

Also, in his sermon, Alhaji Babatunde enjoined people in position of authority to reflect on the past year by making sure that this year, they use their positions to impact lives saying when we serve humanity and make people happy, that is when we can say we are truly serving God.

Also, in their separate prayer session, President General, League of Imans and Alfas in South West, Edo and Delta states, Sheikh Jamiu Kewulere and the Chairman, Pentecostal Fellowship of Nigeria (PFN), Bishop Clement Abifade prayed for the Governor and the state.