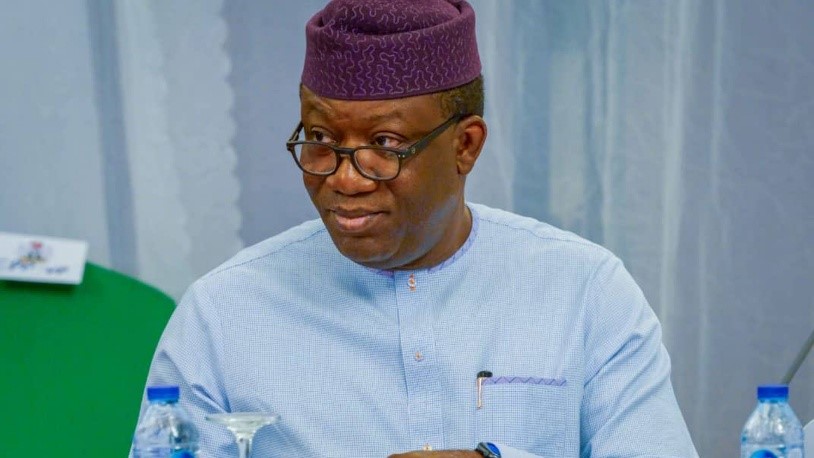 Ekiti State Governor, Dr Kayode Fayemi says his administration in the last four years has fulfilled his electoral promise of reclaiming Ekiti land and restoring its values by making the state a place of pride among the committee of States in the country.

Governor Fayemi, stated this during a pulling out ceremony organized as part of activities marking his last day in office as Ekiti State Governor on Saturday. The event which was an emotional moment for the people of the State, was the first of its kind in the State.

Dr Fayemi, who also inspected the last guard of honour mounted for him by men and officers of the Nigeria Police, said he had served the state conscientiously despite the effect of covid-19 on the economy and scanty resources available to the State.

The event, which brought a new look to the Governor’s office had in attendance members of state executive council, house of assembly members, political appointees that served under his administration, permanent secretaries, state government officials, traditional rulers, family and friends of the Governor.

Governor Fayemi, in a carnival like manner was conveyed in a motorcade with his wife, Erelu Bisi Fayemi and the deputy Governor, Otunba Bisi Egbeyemi, while members of the House of Assembly, executive council, political aides and permanent secretary accompanied him with songs and jamboree from the front of Governor’s office to the entrance of the governor’s office main gate.

Governor Fayemi, who performed his last official duty in the presence of the audience and also signed pardon warrant for some prisoners serving in the Nigeria correctional Centre, Ado-Ekiti, disclosed that he has handed over the keys to Governor’s office and Government house to the Permanent Secretary Government House and Protocol, for onward transmission to the incoming Governor of the State, Abayomi Biodun Oyebanji.

Expressing gratitude to Ekiti forbears, the kabyesis, his predecessors and those who served with him, Dr Fayemi maintained that Ekiti had been well nurtured and had made significant progress under all the people that had served in the state, right from the first military administrator down to his tenure.

He further expressed gratitude to Ekiti people for putting him on the pedestal of service which exposed him to other lofty heights as the Chairman of all the governors in the country and the president of all governors in Africa.

According to him, “Ours is a story of the determined people, right from our history, our forebears believed so much in this place and resisted all oppressions in order to keep us together in the federation of Ekiti State known as Ekiti Parapo.

“Our kabyesis are leading lights, struggled for us to have a state that can be called ours, eventually paid off and on October, 1996 we got a state of our own and we have been nurturing that state with every progressive step forward right from the time of the first military administrator the Late Colonel Inua Bawa to his successor Navy Captain Atanda Yusuf; and then to our leader the first civilian Governor of the State, Otunba Niyi Adebayo who was later succeeded by Dr Peter Ayodele Fayose; and the baton has been passing from one governor to the next until it was my turn to pick the baton on October 16, 2018.

“But every beginning has an end, we have given ourselves to serve Ekiti unstintingly in the last four years, many rivers have crossed, many bridges have been scaled, we had to deal with COVID 19 pandemic in the space of those four years, we have had to struggle with declining economy and reduced resources but we were never daunted in delivering the promised we made to our people to reclaim this land and restore its value and I believe we have restore Ekiti to a pride of place in the committee of State in Nigeria.

“I am confident that my successor will keep the flag flying, he will do that which ekiti people has been promised by him in the course of his campaign and as I am sure that he will also recount that tomorrow at his inauguration.

“All we can do is support him and I beg all of us, good Ekiti people those of us who are here present and those who are listening to us at home, I plead with us to support Biodun Abayomi Oyebanji the way you supported me even more than the way you supported me, so that we can even build a better state. A state that is responsive to the yearnings of our citizens, I thank you all for all that you have done to help us keep our state peaceful, prosperous, forward looking and progressive and to keep building on it, rather than removing from it surely the sky is the limit.”