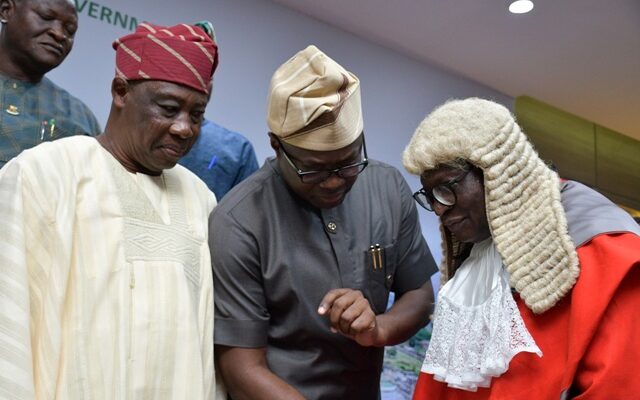 …as gov charges him to put state’s interest first

Oyo State Governor, ‘Seyi Makinde, on Monday, charged the new Deputy Governor of the state, Barrister Abdulroheem Adebayo Adeleke Lawal, to see his position as a responsibility to deliver good governance to the people of Oyo State.

The governor gave this charge shortly after Lawal, a former Oyo State Attorney-General and Commissioner for Justice as well as the immediate past chairman of the state’s Housing Corporation, took an oath of office administered by the Chief Judge of the State, Hon. Justice Muntar Abimbola.

The governor, while speaking at the swearing-in ceremony held at the Executive Chamber of the Governor’s Office, Secretariat, Ibadan, admonished the new deputy governor to put the interest of the state first and serve the state diligently in his new capacity.

A statement by the Chief Press Secretary to the governor, Mr. Taiwo Adisa, quoted him as saying that the Housing Corporation, Oyo State Road Maintenance Agency, (OYSTROMA) and the Ministry of Justice will be under the supervision of the new Deputy Governor.

The governor said: “I want to start by welcoming our new Deputy Governor, His Excellency, Barrister Bayo Lawal, to the Oyo State Executive Council.

“I know you operated from this Exco chamber from 1999 to 2003 and I am sure a lot of things have changed between then and now.

“As we all know, you are already a part of this administration as the chairman of the Oyo State Housing Corporation.

“Your new position is evidence that you excelled in your role. But for us, as the saying goes, the reward for hard work is more work, and that is why we are giving you more work.

“The position is that of trust. Our masters are the people of Oyo State and our responsibility is to continue to serve them to the best of our abilities and deliver good governance to them.

“Let me encourage you to put the interest of the people of Oyo State first. You will continue to supervise the Housing Corporation even from this position. Also, the Oyo State Road Maintenance Agency, OYSTROMA, will be under your direct supervision.

“Finally, you have operated as the Attorney-General of this state before. So, the Ministry of Justice will also be under your watch.

“Our people expect so much from us because to whom much is given, much is expected. This is the campaign season but here in Oyo State, we will continue to work for the good of our people throughout this season.”

The governor added that the administration is looking forward to benefiting from the wealth of wisdom and experience of the new deputy governor, so that together, they could continue the task of moving Oyo State people from poverty to prosperity.

“We look forward to benefiting from your wealth of wisdom and experience. This is what I say most of the time and this is what this administration is all about. We want to move our people from poverty to prosperity. So, you are welcome on board,” the governor added.

While speaking to newsmen shortly after the swearing-in cerrmony, the new Deputy Governor appreciated Governor Makinde for nominating him as his running mate for the 2023 governorship election, saying that his debt of gratitude is limitless.

“I have to give my gratitude to His Excellency, the Governor of Oyo State, who nominated me as his running mate towards 2023. My debt of gratitude is limitless.

“As you have witnessed this happen, I did not notice he was monitoring my activities as the chairman of the Housing Corporation, but it was manifested today.”

“This is a challenge to me as a person and to all of us in Oyo State to cooperate, with the view of moving the government forward in all ramifications.

“We are already entering the campaign season but jumping into the season is not enough, we have to trace back to the last three years and see what has been achieved.

“So, this is what I have come on board to complement the already established achievements provided by this administration,” Lawal added.

The event was attended by the Speaker, Oyo State House of Assembly, Rt. Hon. Adebo Ogundoyin; Secretary to the State Government, Mrs. Olubamiwo Adeosun; Chief of Staff to the Governor, Hon. Segun Ogunwuyi and other top government functionaries.

Others who attended the event were former Speaker of the Oyo State House Assembly, Senator Monsurat Sunmonu, members of House of Assembly and some Service Commanders, among others.