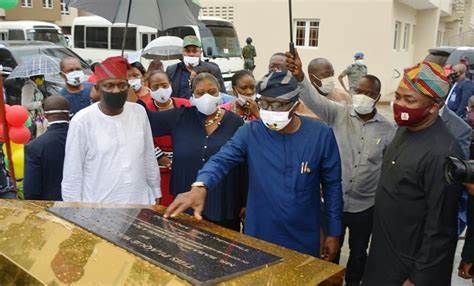 The Gov. Babajide Sanwo-Olu-led administration in Lagos State has completed 14 housing schemes within two years through its affordable mass housing drive, according to the Commissioner for Housing, Mr Moruf Akinderu-Fatai.

The commissioner, speaking during the annual ministerial news conference on Tuesday, he said that work was progressing on 21 other schemes at various stages of completion.

Akinderu-Fatai said that the efforts to bridge the gap was being challenged by the increased influx of people from other parts of the country into Lagos State, due to the insurgency in some states.

“By the third year of Sanwo-Olu administration, over 7,000 housing units would have been delivered,” he said.

The commissioner said that the government would continue to pursue policies that would enable more residents to become home-owners, in spite of the economic situation.

He assured that government was considering accessibility and affordability, by constructing road networks and other infrastructure.

Akinderu-Fatai listed various housing packages available to various segments and classes in various parts of the state, in addition to the social housing drive of the government.

He said that about 70 hectares had been secured in Ijanikin to engage more private sector people and technology in quick housing production, adding that government was targeting more high rise buildings.

“We are not only going to build more houses in the hinterlands, but we will open up the areas,” the commissioner said.

“Based on the all-inclusive stance of the Sanwo-Olu-led administration, there are completed and ongoing projects in all parts of the state, and all categories of residents have the opportunity of accessing the housing provision,” he said.

The commisioner said that the state government was embracing various funding options, to drastically meet the housing needs in the state.

Akinderu-Fatai appealed to private sector developers to actively partner with the state government to increase the housing stock, to meet up with the population growth of Lagos.

He said that government had made investor-friendly policies to attract the desired investments in the housing sector.