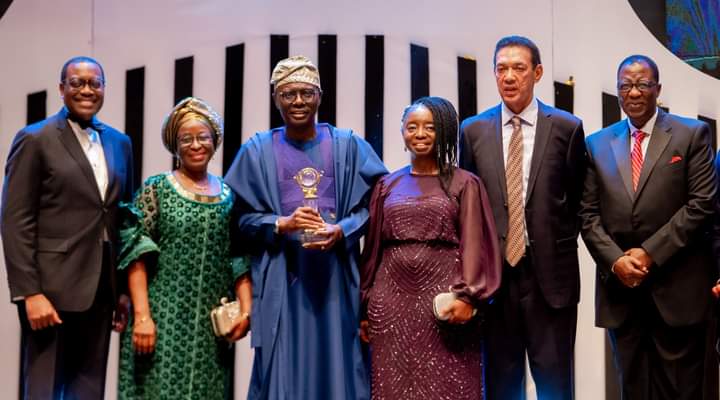 Independent Newspaper, a foremost national daily, named Sanwo-Olu as Governor of the Year for Infrastructure and Urban Renewal. The Governor, the newspaper said, has matched his campaign promises with actions, delivering tangible projects across Local Government Areas in Lagos.

Also, Sanwo-Olu was voted by Nigerians as Silverbird Man of the Year, becoming the 20th recipient of the prestigious award initiated by the Silverbird Group to celebrate public and private citizens whose actions have shaped the course of development positively.

The Governor received both awards at separate events organised by the awarding institutions at Eko Hotels and Suites in Victoria Island, Lagos. The newspaper held its own event on Saturday, Silverbird Group’s ceremony was held on Sunday evening.

Independent Newspaper said Sanwo-Olu was shortlisted for the prize for providing service-centred leadership in Lagos, stressing that the Lagos Governor had become the reference point for excellence in public service in contemporary time.

Independent newspaper said: “The methodical implementation of the THEMES Agenda of the Sanwo-Olu administration is an eloquent testimony to the Governor’s resolve to transform Lagos State into a leading mega-city. From Ikorodu to Badagry, from Epe to Alimosho, from Agege to Satellite Town, more than 301 inner roads were rehabilitated and modern infrastructure in schools, health care and transportation spring up daily.

“His magic wand is visible in education, with the introduction of Eko EXCEL programme to revolutionise primary school in Lagos. Education appears to be the dearest project to Sanwo-Olu. He is determined to leave no child behind in his drive for quality education. The Eko EXCEL has reached over 1,000 primary schools, while over 13,000 teachers and 450,000 pupils have benefitted from the scheme.”

Presenting the plaque to Sanwo-Olu at the well-attended event, the Silverbird Group chairman, Sen. Ben Murray-Bruce, said the approach adopted by the Governor in the implementation of his administration’s development agenda, known as THEMES Agenda, showed Sanwo-Olu fully prepared for the position of leadership and had been discharging on his mandate with good results.

Murray-Bruce said the Governor’s footprint has been felt across sectors, stressing that his recognition as Silverbird Man of the Year affirmed legitimacy and people’s trust in Sanwo-Olu’s leadership.

The Silverbird award, which started 20 years ago, subjects its nominees to a public voting mechanism through which recipients are picked for the recognition.

Murray-Bruce said: “Sanwo-Olu got the highest number of votes to win the prize. What we are seeing here reflects the wishes of the people of Nigeria. The Governor is a great man, who has achieved great things while still in office.”

In his acceptance speech, Sanwo-Olu dedicated both awards to Nigerians who toil daily to make the country work for all citizens and particularly to residents of Lagos for standing by his Government.

The Governor said he did not accept the recognitions with the belief that all set objectives to take Lagos on higher pedestal in growth and development had been achieved by his administration, but take the awards as an unbiased acknowledgment of his modest effort to rekindle the hope of the citizens in the development of the country.

Sanwo-Olu reiterated that he would keep all his campaign promises to the residents of Lagos.

He said: “The awards are indeed an expression of what it means to be of humble service to the people. For every breath that we have, I’ll continue to ensure that all the promises that we have given to Lagosians, we keep them. Our journey to Greater Lagos is not complete; our work is not done yet. We are convinced that with the support of all of our citizens, we are on the right track.

“We get to fix things, because we have no other country. Whether we are youth, middle-aged or senior citizens, we have one property in common; our country. We all must get to work, roll up our sleeves and contribute efforts to fix this country for the current and coming generations. I strongly believe we have the potential, energy and commitment; it is only the leadership we must get right.”