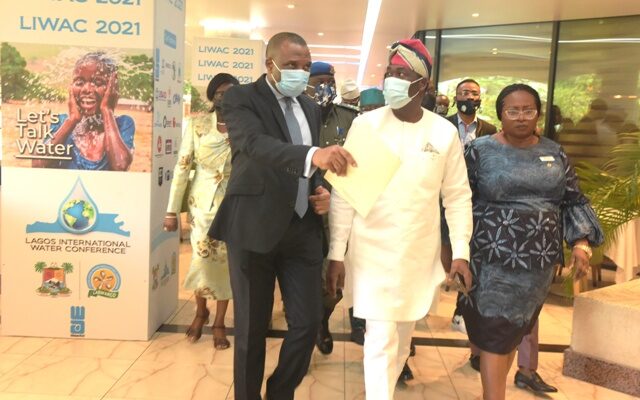 Lagos State Governor, Mr. Babajide Sanwo-Olu on Wednesday said the state government was working assiduously to bridge the huge deficit in water supply to residents, assuring that the phase II of Adiyan Water Project which now stands at 80 per cent completion stage would soon become operational.

Sanwo-Olu, who spoke at the second edition of annual International Water Conference organized by the Lagos State Water Regulatory Commission (LASWARCO) held at Eko Hotels & Suites, Victoria Island, said the state government was quite aware of the 540 Million Gallons Per Day (MGD) demand and every necessary effort would be mustered to ensure residents have access to clean and safe water.

The Governor, who was represented by the Deputy Governor, Dr. Obafemi Hamzat said: “The Lagos State Water Supply Master Plan estimates daily water demand in the city at 540 million gallons per day (MGD) but production by the Lagos State Water Corporation (LSWC) stands at 210 MGD. This shows a clear deficit of over 300MGD, which translates to less than 40% access to clean, and safe water.

“As a government, we are not oblivious of this gap and its consequences on the health of our populace. In order to close this gap, I toured the Lagos Water Corporation Facilities at Adiyan, Iju and Akute at the inception of my administration.

“We have expended resources on these facilities and I am happy to tell you that the Adiyan II plant that will bring additional 70 MGD to the already existing water capacity will soon become operational.”

He said the conference, with the theme: “Water Security and Investment Opportunities in Megacities: A case of Lagos State,” was targeted at harnessing how Lagos as a State and an emerging Smart City can develop ideas for water security and to create investment opportunities in the water sector like other megacities.

He added that the nexus between water security and socio-economic growth could not be overemphasized, just as he described access to clean water as a fundamental right, which to a large extent determines how well people flourish even when other basic rights are in place.

The Governor said with a population of over 22 million people, there was no better time than now to make calculated decisions on what must be done to actualize the goal of an efficient water sector that is complemented with high returns on smart investments, adding that concerted efforts have also been made to regulate the sector to protect residents.

“As you know, health and environment are two key pillars of my administration’s T.H.E.M.E.S Development Agenda and this conference is vital to the accomplishment of some of our key deliverables for these pivotal sectors.

“With the Sustainable Development Goal 6 as our anchor, we have committed major resources to groundwater quality control, drinking water quality regulation, and packaged water service oversight. All these are being done to improve Lagosians’ productivity and quality of life.

“Through LASWARCO, we have been able to curb unwholesome water production and indiscriminate drilling of boreholes, which is a major contributor to lower aquifer and flooding,” he said.

Earlier, Commissioner for the Environment and Water Resources, Mr Tunji Bello said the conference was intentionally organized to focus on solutions and results capable of unbundling the obstacles to financial viability and access to clean water and sanitation through experimental knowledge, and also significantly improve on the indices of water supply, sanitation and hygiene (WASH) in the state.

Executive Secretary of LASWARCO, Mrs Funke Adepoju said the conference was aimed at deepening conversations around expanding access to water and investment opportunities in the state, adding that recommendations at the end of the conference would be very useful, going forward.

In her goodwill message, Country Director, WaterAid Nigeria, Evelyn Mere said for Lagos to meet the Sustainable Development Goals (SDGs) targets on universal access to water, an annual sector spending of N300billion would have to be committed, while Nigeria would have to spend $2.1bn annually in capital, operations and maintenance to meet SDG 6.