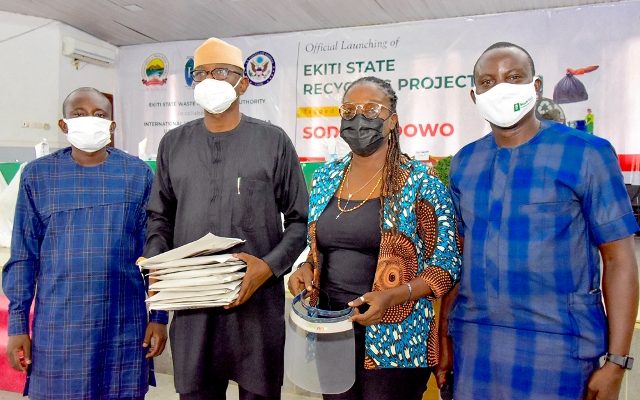 Ekiti State Governor, Dr Kayode Fayemi, has reiterated the commitment of his administration to transit from the “make-use-dispose” orientation of materials utilization to an industrial ecosystem where wastes can be recycled, reused, recovered and re-purposed for other uses.

Dr Fayemi, who stated this at the launch the Ekiti State Recycling Project tagged “Sodotin dowo” (waste to wealth), said the initiative was aimed at changing the perception of Ekiti people towards wastes disposal.

The Governor, who was represented at the event by the Attorney-General and Commissioner for Justice, Barr. Wale Fapohunda, commended the Ministry of Environment and Natural Resources as well as the Ekiti State Waste Management Authority for providing a platform for the collaboration with the private sector partners to kick-start recycling project in the state.

He also expressed appreciation of government to the United States Consulate General, Lagos and the International Visitor Leadership Program (IVLP) for collaborating with his government and supporting the initiative in the state adding that the project was aimed to empower students, women and youths to become agents of change in their respective institutions, offices and communities.

Dr Fayemi called on private sector partners to work as a team in order to achieve success in this laudable initiative aimed at repositioning the state for better economic advancement.

“As part of 5 point agenda of this administration, which are enhancing good governance; entrenching social investment; promoting knowledge economy; infrastructure development and agriculture and rural development, through this initiative, we believe that we are building the Ekiti of our dreams by judiciously implementing life-changing programme and projects to engage our teeming youths and students and at the same time changing the perception in the ways of life of Ekiti people. He added.

Earlier, the Commissioner for Environment and Natural resources, Princess Iyabo Fakunle-Okiemeh revealed that Nigeria generate a total of 65million metric tonnes of waste annually and stressed the importance of taking the project serious to enable the state join other parts of the country to achieve effective recycling process.

Princess Okiemeh emphasized the need for Nigeria to reduce the total volume of wastes by embracing paperless activities especially in offices.

In his remarks, the Sole Administrator of Ekiti State Waste Management Authority, Engr. Bayo Kelekun explained that the project would bring about a significant shift to waste recycling .

Kelekun said the project would include process of recovering wastes and reprocessing the materials into functional and useful products such as Jerseys and interlocking as well as reduce the high quantities of plastics, nylons and bottles wastes generating while putting less pressure on virgin materials to produce brand new products.

In his good will message, the representative of the President of International Visitor Leadership Program (IVLP) and the Consulate General, Lagos, Joseph Iyowese appreciated Governor Fayemi for giving his organization the opportunity to partner with the state government in its drive to join the global Recyclers group.

While reiterating the commitment of the IVLP President to the project, Iyowese assured the state of total support for the project to ensure its full realization.