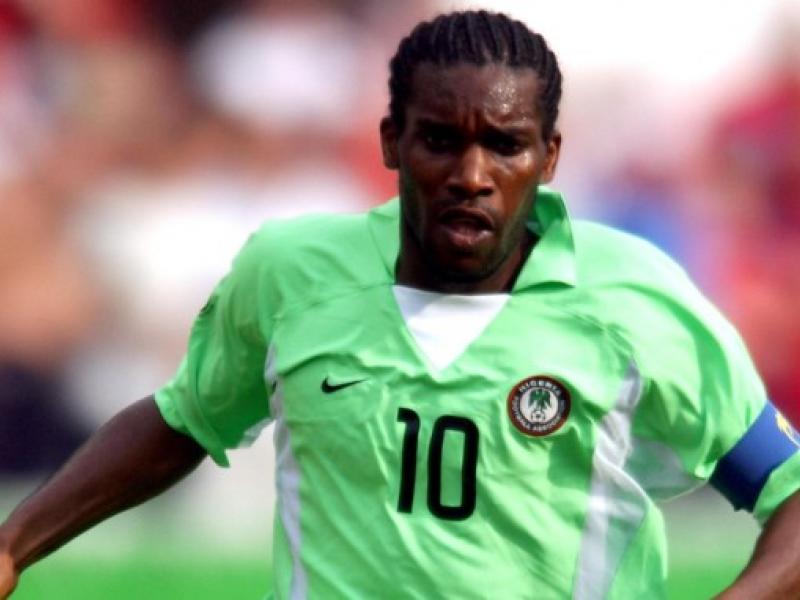 Our Made-In-Nigeria Ambassador for the week, Augustine Azuka “Jay-Jay” Okocha (born 14 August 1973) is a Nigerian former professional footballer who played as an attacking midfielder. A quick and skillful playmaker, who is considered as the best Nigerian and one of the best African players of all time, Okocha was known for his confidence with the ball, technique, creativity, and dribbling skills, as well as his use of feints, in particular the stepover. Due to his skill, he was described as being ‘so good that they named him twice’ (a line immortalised in a terrace chant while Okocha played for Bolton Wanderers).

Augustine Azuka “Jay-Jay” Okocha was born in Enugu, Enugu State. His parents lived in Iwo local Government, Osun State, Nigeria. The name Jay-Jay was passed down from his elder brother James, who started playing football first; his immediate elder brother, Emmanuel was also called Emma Jay-jay, but the name stuck with Okocha instead. He began playing football on the streets just like many other football stars, usually with a makeshift ball.

In 1990, he joined Enugu Rangers. In his time at the club he produced many spectacular displays including one where he rounded off and scored a goal, against experienced Nigerian goalkeeper Willy Okpara in a match against BCC Lions. Later that year, he went on holiday to West Germany, so he could watch German league football. His friend Binebi Numa was playing in the Third Division for Borussia Neunkirchen, and one morning Okocha accompanied Numa to training, where he asked to join in. The Neunkirchen coach was impressed with Okocha’s skills and invited him back the next day before offering him a contract. A year later, he joined FC Saarbrücken, but stayed only a few months with the Bundesliga side before a move to the Bundesliga with Eintracht Frankfurt.

A celebrated ‘master dribbler’, Okocha joined Eintracht Frankfurt in December 1991. One highlight being a goal he scored against Karlsruher SC, dribbling in the penalty box and slotting the ball past goalkeeper Oliver Kahn even going past some players twice. The goal was voted Goal of the Season by many football magazines, and also voted as 1993 Goal of the Year by viewers of Sportschau (an ARD German TV sports programme).

Okocha joined Turkish club Fenerbahçe and in his two seasons with the team, he amassed 30 goals in 62 appearances, many of them coming from direct free kicks, which became something of a trademark for him at the club.

In 1998, French side Paris Saint-Germain spent around £14 million to sign Okocha, making him the most expensive African player at the time. During his four-year stint with PSG, he played 84 matches and scored 12 goals. He has also served as a mentor, at the time, for young Brazilian footballer Ronaldinho during his time in Paris.

Okocha joined Bolton Wanderers after leaving PSG in the summer of 2002. His debut season, despite being hampered by injuries, made him a favourite with the Bolton fans, with the team printing shirts with the inscription “Jay-Jay – so good they named him twice”. He steered the team away from relegation with seven goals, including the team Goal of the Season in the vital league win against West Ham United. This was voted Bolton’s best Premier League goal in a fans vote in 2008.

The next season saw Okocha receive more responsibility as he was given the captain’s armband. As captain he led Bolton to their first cup final in nine years where they finished runners-up in the 2004 Football League Cup to Middlesbrough.

After just one season in Qatar, Football League Championship side Hull City signed Okocha on a free transfer in 2007.

He had a distinguished career with the national team. In 1994, he was a member of both the victorious 1994 African Cup of Nations squad. And the World Cup squad who made it to the second round before they lost in a dramatic match against eventual runners-up Italy.

In 1996, Okocha became a key member of an arguably more successful Nigerian side, their Olympic gold winning side at the Atlanta Games, later nicknamed the Dream Team by the Nigerian press after the USA 1992 Olympic gold winning basketball team. In the 1998 FIFA World Cup hosted by France, Okocha played for the Super Eagles side again reaching the round of 16, with a standout performance in their 3–2 opening win against Spain. They went on to be named in the squad of the tournament.

Okocha again joined the Super Eagles in the 2000 African Cup of Nations co-hosted with Ghana. He scored three goals in the tournament, two in the opening game against Tunisia, and then given a standing ovation by the nearly 60,000 attendance when he left the field.

On 21 February 2015, Okocha was elected as the Chairman of the Delta State Football Association.

We celebrate our Made-In-Nigeria Ambassador of the Week, Augustine Azuka “Jay-Jay” Okocha.