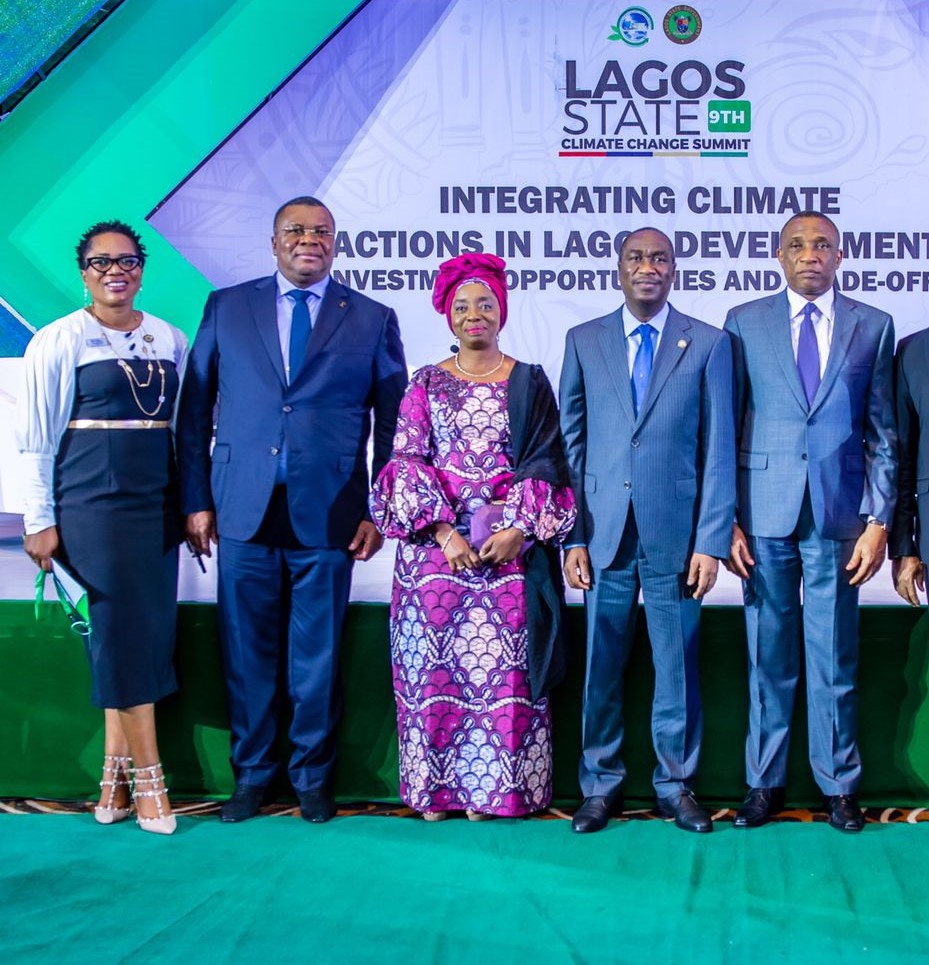 Lagos State Government on Tuesday convened the 9th edition of the Climate Change Summit, advocating higher investment by everyone in order to realise the Climate Action Plan.

This position was espoused by the State Governor, Mr. Babajide Sanwo-Olu, who was represented by his Deputy, Dr. Kadri Obafemi Hamzat, at the Continental Hotel, Victoria Island, Lagos, adding that the State Action Plan launched last year has started reaping great impactful rewards.

Mr. Governor revealed that his administration has instituted several adaptation programmes to ensure that citizens are shielded from the effects of Climate Change.

“In just a year, the Lagos Climate Action Plan has started to reap great rewards. An example of such is the recently awarded grant to Lagos State Waterways Authority to improve the State’s ferry services by providing a multi-model transport network for Lagos, thereby reducing commuters and greenhouse gas emissions associated with on-road transportation”, he stated.

Sanwo-Olu said the State Government understands the symbiosis between the effects of climate change and the persistence of violence against women and as such, has identified several adaptation initiatives to address gender-specific impacts.

“We are in constant discussion with our development partners and donor organisations to find solutions and ways to better adapt to climate impacts, especially as it affects women, children and people with disabilities in terms of provision of water, food security, energy and healthcare services”, he said.

He averred that the collaboration cannot go far without the engagement and tangible actions of the private sector because they are critical players in the climate action space, saying the two parties can mobilise public and private sector finance to drive the net-zero transition.

The Governor implored participants to look critically into sectors such as Waste, Transportation, Energy, Housing and Food systems for the proper economic dimension, meeting global environmental and social standards as well as ecosystem restoration targets.

According to him: “Global climate change is not a future problem. It is affecting every country on every continent. It is disrupting national economies and affecting lives, costing people, communities and countries dearly”.

He reiterated that Lagos, being a littoral State, is often inundated by flash floods due to an increased rise in sea level but the occurrence disappears after a few hours when compared to other affected States in the Nation.

Sanwo-Olu reaffirmed that both the public and private sectors must adopt the Lagos Climate Action Plan to incorporate plans, programmes and actions that will set the State on a pathway for carbon neutrality and increased adaptation for her populace.

Commissioner for the Environment and Water Resources, Tunji Bello, in his welcome address, said the event has over the years served as a conveyor of opinions and suggestions on how to manage the planet against the deadly impact of Climate Change, with special attention on Lagos State.

He said it has become more expedient for all parties, government, leaders of thought, organised private sector and individuals to embark on deliberate and consistent efforts to combat the Climate Change crisis.

Bello explained that the theme for the Y2022 summit: “Integrating Climate Actions in Lagos State Development: Investment Opportunities and Trade-offs”, demonstrates the government’s commitment to Climate Action and how new vistas of opportunities can be opened.

He disclosed that Lagos is the only State that has developed and commenced the implementation of its Climate Action Plan in Nigeria, adding that the Plan highlighted 26 initiatives across adaptation and mitigation actions to advance a sustainable low carbon economy that will achieve net zero by the Year 2050.

The Commissioner also revealed that the State Government, through the Ministry of the Environment and Water Resources, has signed up to the £15m UKAID Climate Action Implementation Programme, which will support cities to accelerate the implementation of their Climate Action Plans (CAPs).

Emphasising that the State is at an advanced stage of completing work on the Lagos Climate Adaptation and Resilient Plan (CARP) as it prepares for the forthcoming Conference of Parties 27 (COP 27) in Egypt in November, Bello added that CARP will incorporate ways of seeking collaboration and support from International Donor Agencies and investors.