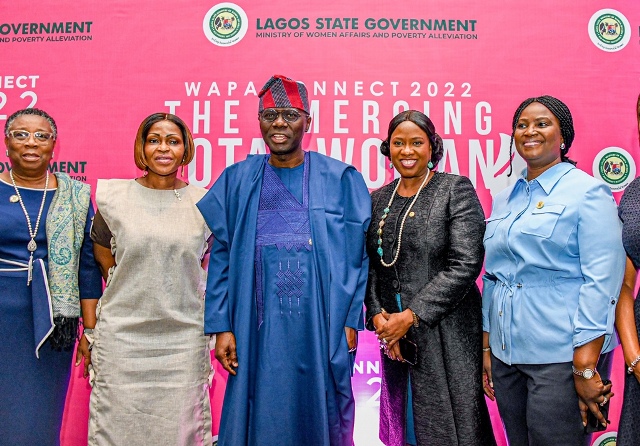 Governor celebrates women, promises more economic opportunities
An account of Lagos State’s journey to a cosmopolitan society would not be fully told without chronicling the contributions made by women to the cultural growth and socio-economic transformation of the State, Governor Babajide Sanwo-Olu said on Tuesday.

Sanwo-Olu acknowledged the roles played by women in the transformation of Lagos at a forum tagged “WAPA Connect”, organised by the Ministry of Women Affairs and Poverty Alleviation at Lagos Continental Hotel with the theme: “The Emerging Total Woman”.

Lagos, the Governor said, presents a unique social structure distinct from other parts, given the unique influence of women in positions of authority. Their impacts, Sanwo-Olu said, have elevated the status of the State to a society where women take full pride.

The forum brought women achievers in the public and private sectors together for networking and to share experiences on contemporary issues critical to enable women achieve their full potential.

Sanwo-Olu said the event’s theme was to address the changing dynamics driven by the new thinking of the 21st century, as well as preparing women for contemporary challenges they needed to overcome.

The Governor said the conference was initiated in pursuance of his administration’s avowed commitment to the policy of inclusiveness and emancipation of women.

He said: “Under the current democratic dispensation, we have seen how women have distinguished themselves with enviable records in public service; as heads of public agencies, Permanent Secretaries, Judges and Commissioners. They have given Lagos its unique status and played vital roles in transforming the State into a cosmopolitan society. Without women, the story of Lagos greatness cannot be told. This is a testimony that there is something we are getting right by putting women in the positions of authority.

“There is no gainsaying that empowered women have achieved different levels of success against all odds in various areas of endeavours. The real issue that must be of serious concern to us is, how do we support, inspire and encourage young emerging women to arrive at their destination against all odds? It is important that we accept this responsibility to guarantee a better future in a socio-economic ecosystem that is increasingly becoming more competitive.”

Sanwo-Olu said Lagos had been pulling down barriers of inequality against the women, initiating policies to make the State become a society where women needed no permission before taking their rightful positions as progress partners.

The State Government, he said, had demonstrated its commitment in the appointment of women as key drivers of public policies and programmes.

The Governor disclosed that women make up 65 percent of Permanent Secretaries in the civil service, 60 percent of judges appointed and 50 per cent of public agencies’ heads.

He said: “Our administration has done so much to create opportunities for women, while also promoting gender equality through the initiatives and programmes being implemented by relevant government agencies, particularly the Ministry of Women Affairs and Poverty Alleviation. I assure you that we will not rest on our oars, as there is still much to be done to support our women in many areas.”

She said millions of women across the country had endured lives of abject poverty, because of the economic inequality and lack of requisite skills to survive in a modernised economy.

Giving women improved access to knowledge and training, the Commissioner said the impacts would be significant in the society in terms of economic growth and social development.

“It is an established fact that the economic activities by women often times constitute the backbone of the economy. This conference is aimed at offering the practicable template for strategic thinking towards gearing up our women to evaluate their rights to economic resources, and expand their access to sexual and reproductive well-being, and become viable tools for socio- economic growth of Lagos.”

She said: “Bringing more women out of the prevailing socio-economic situations will give them more freedom to improve their livelihoods and contribute their quota towards growth of our State. This would place Lagos on equal pedestal with societies where women flourish.”

The conference featured a panel of discussions on topical issues critical to solving challenges women are facing in contemporary time.