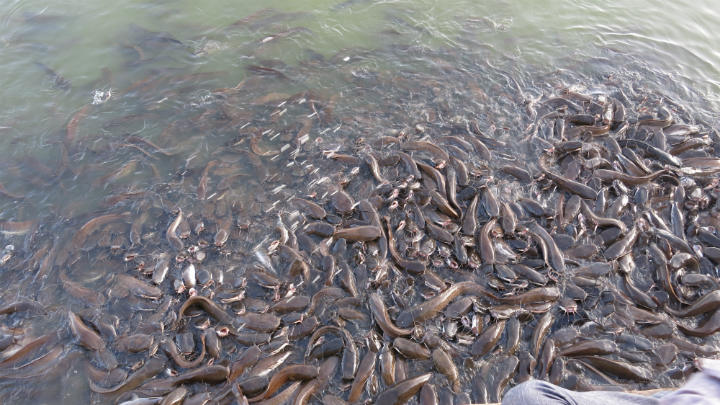 Dr Ime Umoh, Director of Fisheries in the Ministry disclosed in Abuja on Monday that plans are underway to boost local production of fish in the country to enhance food security and meet huge demand potentials.

He spoke at a virtual valedictory workshop on Aquaculture Most Impactful Practice (MIP) under the Feed the Future Nigeria Agricultural Extension and Advisory Services Activity.

The Feed the Future Nigeria Agricultural Extension and Advisory Services Activity is a five-year (2020-2025) USAID funded project in collaboration with Partnership Initiative in Niger Delta (PIND).

The project is being implemented in Benue, Cross River, Delta, Ebonyi, Kaduna, Kebbi, and Niger states by Winrock International.

The $16.6 million investment project which is focused on maize, rice, soybean and aquaculture is expected to expose at least two million smallholder farmers to new technologies between 2020 and 2025.

He said this has become imperative because the fisheries sector is one of the most important sectors in Nigeria, both from an economic and social standpoint.

Umoh said it has become very important to develop the sector because of its contribution to the country’s GDP, its support directly and indirectly to the society, and contributes to the livelihood, employment, and household food security of, especially, Nigeria’s coastal communities, including the Niger Delta.

The director said that the ministry has a goal of increasing domestic fish production and bridge the demand gap by supporting smallholder farmers to reduce hunger and poverty in the country.

Umoh said that the adoption of the MIP for aquaculture would promote business solutions for Small and Medium Enterprises (SMEs) through extension delivery.

“The ministry has formulated policies to boost fish production and are collaborating with development partners, MSMEs and farmers as well as promoting investment in the aquaculture to sustain production levels.

“An example of such collaboration is the promotion of genetically improved tilapia fish seedlings in partnership with USAID and World Fish.

“I enjoined the experts present to review the findings being presented using the juvenile based model approach as an MIP and make their contributions so upon validation of the most impactful practice, the proposed business solutions will have sustainable impact in the aquaculture sector,’’ he said.

In his remarks, the Chief of Party of the project, Dr Ben Odoemena said that there was a lot of waste and inefficiencies in what small holder farmers are doing in terms of productivity when compared to other countries.

He said that there is no better time than now to adopt the juvenile based model of fish production especially with the planned ban on fish importation by the Federal Government by the year 2022.

Odoemena said that the project will create awareness of the benefits of the juvenile based model through engagements with SMEs by establishing, teaching, and disseminating the MIP.

He said it would enable smallholder farmers and small and medium entrepreneurs (SMEs) to better understand the opportunities that abound in aquaculture to enhance their income and improve livelihoods.

According to him, the workshop will also highlight the public and private sectors and the potential for job creation for youth and women in the agribusiness sector.

Iyangbe said that the workshop will discuss “process of MIP identification, business case of the MIP and sustainability and scale-up of the MIP’’ and that the aim was to increase production and efficiency by the MIP approach in the country.

He said that the platform would also afford stakeholders an opportunity to discuss business and effective partnership for Nigeria’s development through private sector engagements.

Iyangbe said there is great potential in Nigeria economic growth having the largest market in the region.

Others include Universities, research institutions, producer groups, lead farmers, aggregators, processors, and others engaged in the aquaculture value chain in Nigeria.