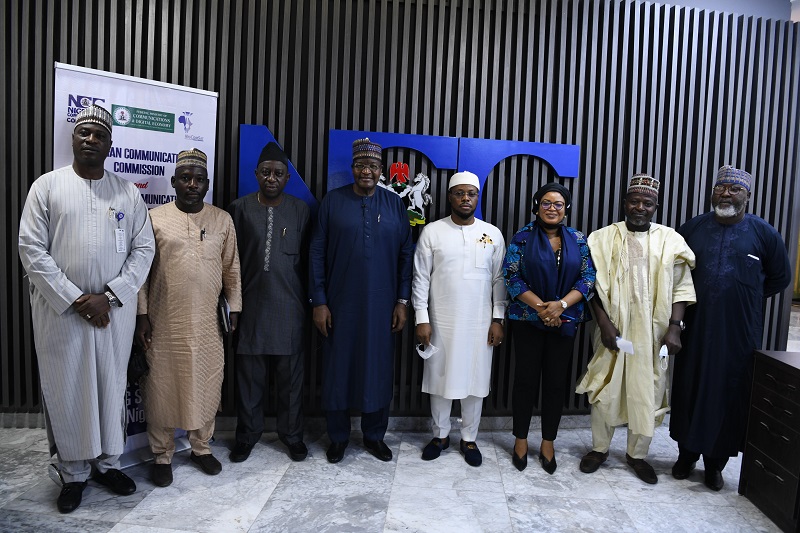 According to him, amongst the Frequency Spectrum bands allocated to 5G by the International Telecommunications Union (ITU), the C-band (3.4GHz – 3.9GHz) stands out because its balancing point between coverage and capacity provides the perfect environment for 5G connectivity.

On the reason behind the MOU, he explained that “For optimal 5G service performance, an average of contiguous 100 MHz of spectrum in the C-band is required by an Operator. However in Nigeria, only 120 MHz of the band (3.4 – 3.52) GHz is available for mobile services while the remaining 680 MHz (3.52 – 4.2) GHz of the band is used by NigComSat (NG-1R) satellites.”

Adding that, “The Commission initiated negotiation with NIGCOMSAT whom in our estimate could make some adjustment to its satellite operation and release part of its Spectrum holding in the band to facilitate the deployment of 5G in Nigeria.”

He commended the Management of the NigComSat under the leadership of Dr. Abimbola Alale for demonstrating that the interest of our dear country is paramount to our organizational or personal interest.

The NCC boss noted that “The two agencies have been in discussions on how to relocate the operations of NG-1R to the standard C-band 300MHz (3.9GHz – 4.2GHz) potion of the band, which is more suitable in terms of Satellite service offering because end user terminal are cheaper there, while leaving the non-standard C-band 400MHz (3.5GHz – 3.9GHz) portion of the band for 5G use. The cost of relocating the NG-1R is expected to be offset from the proceeds of the auction of the 5G Spectrum.”

On his part Chairman Board of Commissioners, Nigerian Communications Commission, Prof. Adeolu Akande highlighted the enormous benefits of the 5G network.

According to him, “Telecommunication evolution from inception to date has led to improvement in user experience witnessed from 2G, 3G and later 4G. The global impact of 4G brought about increases in mobile usage and network performance. 5G will build on this momentum, bringing substantial network improvements, including higher connection speeds, mobility and capacity, as well as low-latency capabilities. In doing so, it enables new use cases and applications that will positively impact different sectors and improve efforts towards achieving Digital Economies. It does not only offer enhanced broadband and ultra-low, ultra-reliable latency communications but also provide massive machine type communications, where a lot of devices will seamlessly connect and independently interact with the internet without human intervention. Thus, enabling several Smart City initiatives.”

Prof. Adeolu added that “Spectrum plays a critical role in realising the full extent of
these new capabilities. Thus, 5G’s full socio-economic impact is dependent on access to a variety of spectrum resources. These Spectrum will play a key role in meeting the demand for many enhanced mobile data services as well as new wireless broadband use cases such as remote object manipulation, industrial automation, virtual and augmented reality and next-generation connectivity for vehicles. These use cases will continue to increase the impact that mobile services have on societies and economies.”

“In China, UAE, Europe, Africa, India, Brazil and Australia, the 3.5GHz band glaringly featured amongst the spectrum that has been prioritized for 5G with prospects for early deployment.”

He concluded that, “the Management of NigComSat and NCC have taken a bold step in the right direction to release contagious quantum of Spectrum in the 3.5GHz band for early deployment of 5G. This type of collaboration seeks to ensure synergy amongst agencies under the Federal Ministry of Communication and Digital Economy.”