The Senate has passed a bill seeking to establish the Modibbo Adama University Teaching Hospital, Yola.


Also passed was a bill to upgrade the Federal Polytechnic, Ilaro, to a full-fledged Federal University of Technology.


The passage of both bills was sequel to the consideration of two separate reports by the Committees on Health (Secondary and Tertiary); and Tertiary Institutions and TETFUND.


Chairman of the Committee on Health, Senator Yahaya Oloriegbe (APC, Kwara Central), said the bill when signed into law, would upgrade the Federal Medical Centre, Yola, to a University Teaching Hospital.


According to him, the hospital “would ensure the delivery of advanced health care services to the people of Adamawa State and its environs.”


He added that it would also contribute to the development of health sciences through research and teaching.


In a related development, Senator Suleiman Sadiq Umar(APC, Kwara North), in a presentation on behalf of the Chairman of the Committee on Tertiary Institutions and TETFUND, Senator Ahmad Babba Kaita (APC, Katsina North), said the upgrade of the Federal Polytechnic, Ilaro, to a University of Technology would provide access to education among the diverse and multicultural demographies in the country.


According to him, the upgrade of the institution would close the gap in technological needs, as well as meet the learning and research needs of prospective students of the host communities and researchers in Nigeria.


Also referred to the Committee was the President’s request for External Borrowing of N2.343 Trillion (About USD6.183 Billion) in the 2021 Appropriation Act.


The Committee which is chaired by Senator Clifford Ordia (PDP, Edo was given four weeks to report back to the Upper Chamber.


In addition, President Buhari’s request for the confirmation of Mr. Kolawole Oladipupo Alabi as Executive Commissioner, Federal Competition and Consumer Protection Commission (FCCPC), was referred by the Senate President to the Committee on Trade and Investment.


The Committee was also given four weeks to turn in its report. 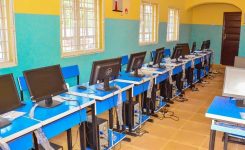