There is need for governments to embrace indigenous technology for improved infrastructural and economic development, the Nigeria Academy of Engineering said on Sunday.

Some of the members of the academy made the call in an interview with the News Agency of Nigeria (NAN) in Lagos.
They spoke on the sidelines of the Nigeria Academy of Engineering Investiture and 2020 Annual Lecture with theme : “The Nigeria Infrastructure Conundrum-The Missing Link’’.

Dr Edet Amana, who was the Guest Speaker at the event, told NAN that the country must find a way to ensure that young `local’’ Nigerians got involved in infrastructural development.

Amana said: “This is important because the young local people are talented and vibrant, and technology developed locally would work and improve the economy.

“Instead of the local and young people looking for how to migrate from the country, of which is bad, these are the people we need to develop the economy and infrastructure because it requires technology.

“Let the local people be involved in technology and not to import everything and expect them to work in Nigeria. They won’t work optimally because we did not internalise that technology.’’

“So, I urge governments to develop own technology. The young people here are vibrant and talented but no encouragement,’’ he said.

Amana, also the Chairman of Amana Consortium, said it is the knowledge infrastructure that controls all other infrastructures and they include the physical, social and organisational infrastructures.
According to him, the country can acquire knowledge internally and mould it to become a National Innovative Scheme, whereby the scheme must be indigenous and not be managed by foreigners.

He, however, said there was need for coordination by the Federal Ministry of Science and Technology for the scheme to take place.

He advised Nigerians to up their game and rise to the challenge because it is a great country with great people.

Another Engineer, Alex Ogedegbe, who is the new President of the academy, said that the academy advises governments and stakeholders in Nigeria to focus more on technology within Nigeria.

“What is happening today in China is because of technology being involved in their economy.

“’The issue is to mobilise the resources we have. We need to engage people to invest their time , effort and money.

The News Agency of Nigeria reports that Ogedegbe was installed as the 11th president of the academy at the event.

Also, 10 fellows were inducted as fellows of the Nigeria Academy of Engineering while some engineers also received the Life Achievement Awards. 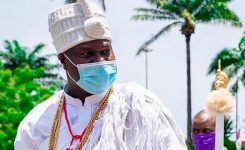