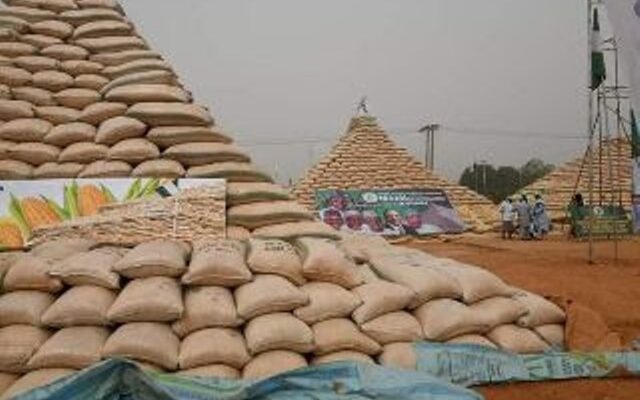 MINA Blog- As the Federal Government of Nigeria unveiled the 2nd National Maize Pyramids in Kaduna, the Central Bank of Nigeria (CBN) on Thursday revealed its preparation for another wet season programme with commitment to financing over 600,000 hectares.

The CBN Governor, represented by Mr. Philip Yusuf, Director, Development Finance Department, said in 2021 the 1st maize pyramids in Katsina with a total of 300MT (displayed in 12 pyramids), the produce was strategically released to the market through allocation to major feed mills and large-scale poultry farms.

He said the yield prior to 2016/2017 in Nigeria was as low as 1.8MT/Ha, considered as the lowest among the top 10 maize producers in Africa, behind countries such as Egypt and South Africa where the yields are 7.7 MT/Ha and 5.3MT/Ha, respectively.

“This low yield resulted in the country’s inability to meet the domestic and industrial maize demand,” he said.

He noted also that a total of 245,913MT was aggregated from the 2020 wet and dry season harvests from selected Prime Anchors, out of which a total of 232,898.55MT have been released.

“The volume of maize in these pyramids before us today is intended to serve as stock for the Strategic Maize Reserve (SMR) to be released immediately to major millers.

“This increased production was taken from the farmers as repayment for the loans and put in a strategic maize reserve,” he added.

“As we prepare for another wet season programme, the Central Bank of Nigeria is committed to financing over 600,000 hectares. Our strategy is hinged on improving productivity by providing more funding for the anchors to enable them to utilize high quality inputs and good agronomic practices to boost output.

“Bringing recent happenings globally into perspective, two of the top 10 exporters of maize (Argentina and Brazil) experienced droughts in 2021, while another two (Ukraine and Russia) are at war. This will certainly impact on maize supply globally and drive prices northwards.

“Consequently, we have planned a more robust and timely wet season to commence in April 2022 for maize and other key commodities like rice, wheat, cassava, sorghum and soyabeans to mitigate the impending food crisis occasioned by the crisis in Russia and Ukraine,” he said.

. “The volume of maize in these pyramids before us today is intended to serve as stock for the Strategic Maize Reserve (SMR) to be released immediately to major millers.

“This increased production was taken from the farmers as repayment for the loans and put in a strategic maize reserve,” he added.

“As we prepare for another wet season programme, the Central Bank of Nigeria is committed to financing over 600,000 hectares. Our strategy is hinged on improving productivity by providing more funding for the anchors to enable them to utilize high quality inputs and good agronomic practices to boost output.

In his keynote address at the ceremony, President Muhammadu Buhari said the gesture is part of the objective of his Administration for the country to be food and nutritional secured.

President Buhari, represented by the Minister of Agriculture, Dr Mohammed Abubakar, said the unveiling of the pyramid would tell the good story about the Nigerian maize farmer with the support of various support programmes like the Anchor borrowers’ programme of the CBN which has helped in closing the gap between supply of maize grains and its demand by domestic and industrial users.

He said the relentless efforts and support of the administration to diversify the economy through the Agricultural sector, which contributes almost 30 per cent of the Gross Domestic Product (GDP), are being manifested.

He also noted that Nigeria is the largest producer of Maize in Africa and occupies the 11th position in the world with large volumes of the tonnage emanating from small-holder farmers (such as members of the Maize association of Nigeria) that cultivates 1-5 hectares.

The president also said Kaduna State is the highest producer of maize grains in Nigeria, adding that holding the unveiling event in Kaduna is the right choice and believed it will spur the state to perform better not only in maize production but other crops of importanc,” he said.

“The Federal Ministry of Agriculture and Rural Development (FMARD) will also continue to support small-holder farmers as they have been identified as the engine room for the achievement of sufficient food Production in Nigeria,” he said.

He said the Federal Ministry of Agriculture has strengthened the sector via different programmes, among which are subsidizing the price of farm inputs such as seeds, chemicals, organic fertilizers, storage facilities as low as 10 per cent, enhancing the technical knowledge of farmers.

“It should be recalled that before the advent of this administration, Nigeria was not self-sufficient in Maize production and had demand and supply gap of over 5 million metric tons.

“However, with the support and intervention programme of this present administration, Nigeria is able to close this gap and gradually pave the way for the export of Maize to international markets.

He noted that there is unprecedented influx of investors, processors and marketers into the Maize industry.

He explained “to achieve food and nutrition security in Nigeria, all concerned stakeholders must support the government in its efforts to revolutionize the Agricultural sector.

In his remarks, the president, Maize Farmers Association of Nigeria (MAAN), Dr Bello Abubakar, said this demonstrates the capacity of MAAN in mobilizing Nigerian farmers to produce what can sustain Nigeria and export over a period of time.

He also said the gesture shows that the MAAN is not just supporting food security but food and nutrition security with the collaboration of Harvest Plus to promote the production and consumption of nutritious vitamin A maize in Nigeria.

Also speaking, the Governor of Kaduna state, Nasir El-rufai, said the state is the largest producer of maize in Nigeria, adding that agriculture is the only way Nigeria would achieve food security, create jobs, social inclusion and enhance livelihood.

Gov. El-rufai, represented by the state commissioner for Agriculture, Alhaji Ibrahim Hussaini, said that the programme would change the narrative for producers, suppliers, service providers and consumers towards strengthening commercial agriculture

“Kaduna State has studied the revised guidelines for the anchor borrowers programme which is private sector driven and we are ready to participate in the facilitation and implementation of the programme through revived guidelines.

He assured that the state would continue to support all the efforts towards enhancing productivity, livelihood, food security, value addition and inclusiveness in the transformation of the agriculture sector in Nigeria.