*Osinbajo: We won’t allow vast majority of our people suffer

With the release of about N288B out of the N500B appropriated for COVID-19 intervention programmes under the Economic Sustainability Plan (ESP), at least 2.1 million jobs have been saved, including new ones created, while over 4000km of federal and rural roads are at least 30% completed since the commencement of the ESP months ago.

These were some of the highlights emerging from today’s meeting of the Economic Sustainability Committee presided over by Vice President Yemi Osinbajo, SAN, at the Presidential Villa.

While noting the considerable progress recorded, Prof. Osinbajo affirmed the President’s resolve to always look out for the Nigerian people, and urged members of the committee “to bear in mind that the vast majority of our people are not allowed to suffer.”

Ministers and heads of agencies executing the Buhari administration’s Economic Sustainability Plan (ESP) reported significant improvement in the implementation of the plan, as the Federal Government ramps up funding for projects across sectors to impact more Nigerians. Already more than 50% of the appropriated sum for the ESP has been released.

Under the Survival Fund scheme specifically, 1.3 million jobs have been saved, and another 774,000 jobs created from the Public Works Programme. This is apart from the total 26,021 jobs created from construction and rehabilitation works.

Other highlights include the release of 100% (i.e. N5bn) appropriation for the COVID-19 Aviation intervention; 50% funding (N26bn) for the Public Works scheme hiring 774,000 persons across the country, among others.

Commenting on the reports presented by ESC members at the meeting, Prof. Osinbajo said “I think that it will be fair to say that on account of the very good work that you all have done, we were able to get out of recession much faster than anyone would have imagined, although only marginally.”

Urging ministers and heads of agencies implementing key programmes of government not to rest on their oars, the Vice President noted that “it is important for us to continually bear in mind that we really have a duty to ensure that the vast majority of our people are not allowed to suffer. So, I feel we should be thinking more about the next thing that we need to do.” 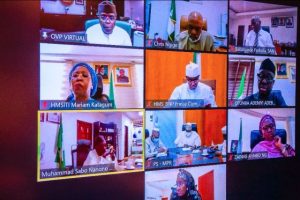 In digital skills support for youth and women, anchored by the Federal Ministry of Communications and Digital Economy, Minister of State for Budget and National Planning, Mr Clem Agba reported that N1.5b which is 50% of the amount appropriated for the scheme primarily targeted for job creation has been released to the ministry.

He added that priority programmes for the intervention is the training of 600 youths (100 from each of the 6 geo-political zones) on VSAT technologies who will also be supported with laptops and stipends.

The Minister noted that the Federal Ministry of Women Affairs has received N625 million (representing 50% of appropriated funds) to implement an empowerment scheme for women through capacity building in innovation and vocational training.

For the Federal Ministry of Youths and Sports, the Minister said N2.6 billion representing 50% appropriation was released for implementation of youth employability improvement scheme through;

*Equipping of youths digital/robotic training centres across the 6 geo-political zones.

Another key highlight of the progress report is the release of N1.25 billion (50%) to the National Commission for Refugees, Migrants and Internally Displaced Persons for implementation of programmes for vulnerable and displaced persons, specifically:

*The construction of 400 housing units for persons of concern in Zamfara, Yobe, Katsina, and Edo states; 8 PHCs and others

*Empowerment of 900 persons of concern with skills, starter packs and startup capital.

The Minister also reported that the Federal Ministry of Humanitarian Affairs, Disaster Management and Social Development received N2.45 billion representing 7.5% of N32.45 billion for cash transfer to the poor and vulnerable, while the balance of N30 billion is being processed.

The progress report presented by the minister showed that in 38 FTHs implementation is at an average of 47% completion with procurement process completed and equipment supply in progress.

Expected outcomes from the interventions in the sector include 520 fully equipped ICU beds available in FTHs; 52 Isolation wards with an aggregate of 1040 beds and associated patient monitoring equipment and 52 molecular labs with the capacity to carry out a minimum of 150 PCR test a day.

Other releases for the health sector, according to the minister include, N10 billion for the establishment of a bio-vaccine laboratory; N5.02 billion representing 50% to the Federal Ministry of Health for implementation of the following projects:

In his presentation, the Minister of Agriculture, Alhaji Mohammed Nanono, said N17 billion has been released for rural roads project under the ESP while about 5.8 million farmers enumerated out of which the data of 3.6 million have been validated.

In the works sector, the Minister of Works and Housing, Mr Babatunde Fashola said a total number of 4,350 direct jobs were recalled and 18,321 indirect jobs were created through the engagement of the contractors and suppliers handling different works across the country. 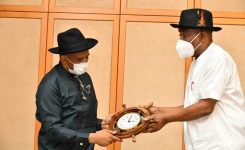 Nigeria: Why we are transforming our food sys...