The Federal Government of Nigeria is planning to inject five to 10 million Liquefied Petroleum Gas (LPG) gas cylinders into the market in the next one year, according to Mr Dayo Adeshina, Programme Manager, National LPG Expansion Implementation Plan.

This was made this known in Lagos at a sensitisation workshop on LPG Adoption and Implementation for Industry Stakeholders.

Adeshina said this was to improve safety and deepen LPG utilisation, also known as cooking gas, in the country.

He said the National LPG Expansion Implementation Plan, domiciled in the Office of the Vice President, was committed to achieving Nigeria’s target of five million Metric Tons of LPG consumption annually by 2027.

Adeshina said, “The Federal Government is working towards injecting five to 10 million cooking gas cylinders into the market within the next one year.

“We are starting the cylinder injection under the first phase in 11 pilot states and FCT, with two states from each of the geopolitical zones.

“What this means is that going forward, cylinders will not be owned by individuals but by the marketers who will ensure that they are safe for usage.’’

Adeshina said Nigeria has gas reserve of 203TCF, adding that the government was desirous of collaborating with stakeholders to ensure its utilisation for development purposes.

He said apart from household consumption, government was also moving to increase LPG usage in agriculture, transportation and manufacturing.

According to him, this will enable the country to reduce CO2 emission by about 20 per cent and create millions of jobs for Nigerians.

Adeshina said apart from investment in infrastructure, the government had also granted waivers on importation of LPG equipment and removed Value Added Tax (VAT) on LPG.

Mr Ahaziah Suleiman, Executive Director, News, Voice of Nigeria, said the Federal Ministry of Information and Culture had deployed various communication tools to sensitise Nigerians to the adoption of LPG as a fuel of choice.

Suleiman said jingles had been produced in indigenous languages to educate Nigerians, especially in the pilot states of the programme, on the advantages of switching to cooking gas.

Mr Nuhu Yakubu, President, Nigeria Liquefied Petroleum Gas Association, said efforts should be made to ensure the availability, accessibility and affordability of cooking gas in the country.

Yakubu said this would encourage more Nigerians to embrace gas usage in their homes with the attendant benefits to the country.

Mr Olalere Odusote, Lagos State Commissioner for Energy and Mineral Resources, said the government was committed to deepening gas utilisation in the state.

Odusote said the population of Lagos makes it imperative for residents to adopt cleaner energy sources for cooking, transportation and power generation. 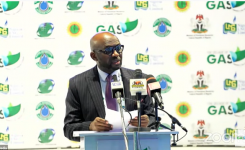