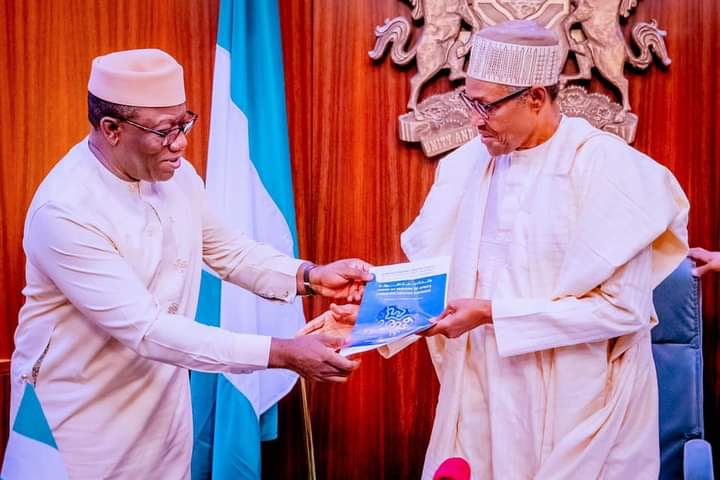 President Muhammadu Buhari warmly lauds Governor of Ekiti State, Dr Kayode Fayemi, who has been elected as President of the Forum of Regions of Africa (FORAF), in his capacity as Chairman of Nigerian Governors’ Forum (NGF).

The election was held after a conference in Casablanca region, Morocco, at the weekend.

Receiving a delegation made up of Fayemi, Gov Abdullahi Sule of Nasarawa State, and Gov Abdullahi Umar Ganduje of Kano State at State House on Monday, the President said: “In spite of the security challenges we have, it is good to see that other countries still believe in our potentialities. Congratulations for doing justice to Nigeria. We thank you.”

President Buhari also thanked all other countries that queued behind Nigeria to emerge FORAF President, noting that it was a good show of brotherhood and solidarity.

Governor Sule said the conference was well attended by Governors and participants from about 22 African countries, where regional issues were discussed, and memorandum of understanding (MOUs) signed on different areas like agriculture, mining, education, scholarships, and many others.

Governor Fayemi, who relinquishes the Presidency to the next NGF President at the expiration of his tenure in office, said the idea of FORAF was for sub-nationals to become engines of growth, “and reduce pressure on central governments.”

He added that FORAF was a unifying force for States (called Regions, Counties, or Provinces in other countries) “to create a globally respected continent,” submitting that Nigeria’s election was a testimony to the huge respect President Buhari enjoys in Africa.

“Other countries simply withdrew their bids, once they saw that Nigeria was interested in the position,” he disclosed.