President Muhammadu Buhari on Thursday, said that his administration would continue to accord priority to railway infrastructure development due to its economic importance.

Buhari made the remarks in Zawachiki, Kano State at the ground breaking ceremony of Kaduna-Kano rail line.

“I am delighted to preside over the ground breaking ceremony to mark the commencement of construction activities on the Kano-Kaduna segment of the modernisation project at the proposed site of the Kano railway station, which is adjacent to the Dala Inland Dry Port,” he said.

He said that commencement of the construction activities of the Kaduna-Kano rail line project represented the commitment of the administration in the revival of Nigerian Railway system.

“The project is crucial to the establishment of the supply chain in railway transport within its corridor, Kano, Kaduna, Abuja, and it links major commercial cities in Kano and Kaduna to Abuja.

“After completion, it will link the Lagos-Ibadan railway project there Abuja-Minna-Ilorin-Oshogbo-Ibadan to Lagos on one end, and Maradi in Niger Republic on the other end.”

He revealed that the railway line would be linked to the Tin Can Island port, it was also expected that the inland dry ports on the routes would be activated.

Buhari said that would enable the ports to receive imports directly from international markets.

He commended the transportation minister, Rotimi Ameachi for his focus and resolve which represented the drive of the administration in railway infrastructure development.

In his remarks, Ameachi said that the project covers 203 kilometres double track standard gauge railway from Kano to Kaduna.

He said that it traversed Kaduna, Zaria and Kano cities, with three railway stations both for passengers and freight services at Rigachukun, Zaria and Kano with varying capacities and categories.

He said that the contract was awarded to China Civil Construction Engineering Company and was expected to be completed in 18 months. 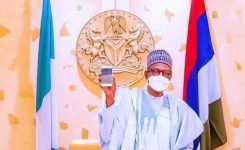 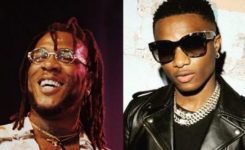 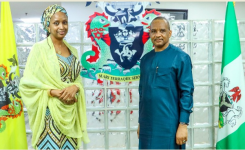