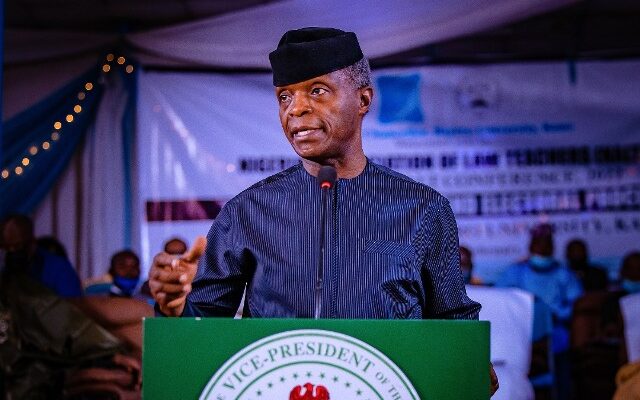 *VP receives RMAFC delegation, speaks at public presentation of “Musings of a Precant” in Lagos

In a bid to provide succour and ensure the payment of the entitlements of ex-workers of aviation ground handling service provider – Skyway Aviation Handling Company Plc (SAHCO), the National Council on Privatization (NCP), presided over by Vice President Yemi Osinbajo, SAN has approved the sum of N1.371 billion for the settlement of outstanding redundancy benefits owed the workers.

This was one of the highlights of the 6th meeting of the Council last Friday at the Presidential Villa, Abuja.

The Director-General of the Bureau of Public Enterprises (BPE), Mr. Alex Okoh, had presented a memo to Council seeking its approval for the payment of the sum due to ex-SAHCO workers.

The DG also informed the Council of the notice of “peaceful protest” received from ex-workers of SAHCO, who are also members of the National Union of Air Transport Employees (NUATE) and Air Transport Services Senior Staff Association of Nigeria (ATSSAN), on account of the non-payment of their outstanding severance entitlements after the disengagement of the workers from the company following its privatization in 2009.

After deliberation on the matter, the Council gave the approval for the outstanding severance entitlements of the ex-workers to be paid.

The Council also received an update on the development of a 1,650 Mega Watts Hydro Power Plant in Makurdi, Benue State, particularly the inauguration of the Project Steering Committee and the proposed publication on the Expression of Interest for the engagement of a Transaction Adviser for the project.

Regarding the update on the concession of the Zungeru Hydroelectric Power Plant, the Council was informed that Requests for Qualification (RfQs) were received from 11 Consortiums, out of which 3 (NSP Consortium, Mainstream Energy and Africa Plus Partners) were shortlisted to present proposals for the concession.

On the restructuring of the Kano, Benin, Kaduna, Ibadan, and Port Harcourt DisCos, Council was informed that the notifications of change of Directors for all the DisCos had been filed at the Corporate Affairs Commission, while the BPE has issued guidelines to the banks/lenders for the sale of their 60% shares in the assets.

Further updates were received on the sale of five (5) NIPP Power Plants, particularly the engagements with the Nigerian Governors Forum on the NIPP transaction, and the resolution by the governors to constitute a committee to review the transaction and revert to the Bureau.

The Council expressed satisfaction with the BPE’s handling of the engagements with the governors on the sale of the NIPP and the Federal Government’s 40% interest in the Aba Ring-Fenced area.

In attendance at the meeting were council members including Ministers of Power, Alhaji Abubakar Aliyu; Finance, Budget and National Planning, Hajiya Zainab Ahmed; the Director-General of the BPE, Mr. Alex Okoh; representatives of Federal Ministry of Justice, heads of relevant MDAs and other senior government officials.

Also on Friday, the VP received on a courtesy visit to the Presidential Villa, the management of the Revenue Mobilization Allocation and Fiscal Commission (RMAFC) led by its Chairman, Mohammed Bello Shehu.

In his remarks, Shehu appealed to the VP to support the commission’s drive to digitize its operations, particularly the efficient allocation and disbursement of revenues to the 3 tiers of government in accordance with the Act setting up the commission.

The Chairman noted that paucity of funds was affecting the commission’s oversight on revenue generating government agencies and general migration from manual to digital operations, while he also outlined the implications of the development on the revenues of the federation and the economy.

In another development, the Vice President yesterday delivered remarks at the public presentation of the book, “Musings of A Precant” by Revd. Prof. Konyin Ajayi, SAN, in Lagos.

Speaking at the book launch, which held at Terra Culture, Prof. Osinbajo highlighted the significance of applying one’s knowledge, skills and intellect for the benefit of the larger society, as well as the power of prayer.

Drawing parallels between the author – a legal luminary- and Paul the Apostle, the VP noted that, “Like Paul, God knew all along, that with all his (the author’s) great legal knowledge, writing skills and power of expression, and the deployment of faultless logic, he was preparing him to propagate the gospel by the writing of important theological works.”

Highlighting the author’s stellar academic and career accomplishments, the Vice President also pointed out that while “the apostle Paul was studying law and jurisprudence under Gamaliel, (one of the best-known teachers of his generation), and later became one of the best-known expositors of Jewish doctrine and laws, and later its most famous enforcer, little did he know then that he was being prepared, not just to be a great scholar of Judaism, but he was to become the most prolific purveyor of the gospel of Jesus Christ, writer of 13 of the 27 books of the New Testament.

“So it was when Konyin was going through the elite education he had first at Ife, top of his class in the Faculty of Law, then Harvard-LLM, and a PhD from Cambridge studying law; then partner in one of the foremost legal practices in Nigeria, becoming a Senior Advocate of Nigeria and then a Professor of Law, writing several learned articles and books. In fact, he started writing law books early, he was probably under 25 when he wrote his first legal text, and he and I collaborated on a number of legal academic works years ago.”

The VP then presented the book at an event also marked by the singing of Carols by the Choir of Emmanuel Chapel of the Methodist Church where Revd. Ajayi ministers.