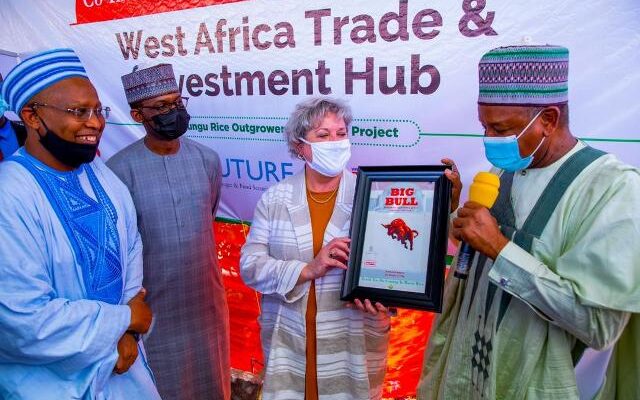 WACOT Rice Limited, a subsidiary of TGI Group which is based in Argungu, Kebbi State, will create 60,000 jobs across Nigeria and West Africa through its partnership with the USAID on the rice out grower expansion project.

He said: “The core objective of establishing WACOT in Argungu and the launching of this partnership today is to create catalyst for investment and provide grants to more farmers”.

Little John explained that the jobs created would be available across Nigeria and West Africa. “We want to show that we can create jobs. And we want to also increase trade investment with our partners across West African countries”.

In his remarks, Chairman of WACOT Rice Limited, Farouk Gumel said that over 2,000 jobs have been created by the company due to the USAID partnership. He stated that the expansion of the company has given opportunities for more farmers to cultivate more land for rice production.

According to Gumel, “when the company was established in 2017, we hardly sold our product for the first three months because customers were demanding for foreign rice but today, we steadily sell Nigerian rice and people continue to ask for it. Many people have shown interest in becoming our agents and marketers”.

Earlier, the United States Ambassador to Nigeria, Mary Bert Leonard had said that the US government’s partnership with WACOT was to sustain food security and creation of more jobs in Nigeria.

Leonard said that more than $8 million (about N3.1 billion) would be injected into the economy through the partnership.

In his remarks, Kebbi state Governor, Senator Abubakar Atiku Bagudu said the presence of WACOT Rice in the state has positively impacted its economy, adding that the development attracted the USAID investment.

He commended the company for always being active since it commenced its operations in the state, stressing that many women have benefited from their farmers’ empowerment.

Through the partnership with USAID, WACOT Rice is registering an additional 5,143 farmers to complement its already existing outgrower network in the state. And they will cultivate over 5,000 additional hectares of land thereby producing over 20,000 tons of paddy which will be utilised at WACOT Rice’s 120,000-ton rice mill in Argungu.