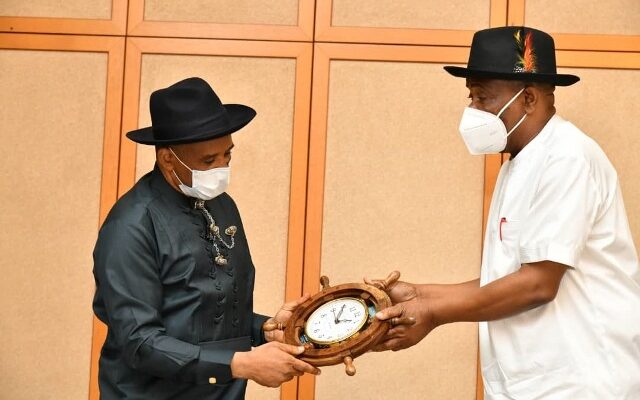 Rivers State Governor Nyesom Wike has commended the Nigerian Maritime Administration and Safety Agency (NIMASA) for designing and pursuing a Blue Economy strategy purposed to replace the current oil economy in about 10 years. Wike stated this in Port Harcourt, when he received the Director General of NIMASA, Dr. Bashir Jamoh, who was on a courtesy visit.

The governor said NIMASA’s plan for sustainable use of Nigeria’s abundant maritime resources was in line with the country’s economic diversification drive.

Jamoh earlier appealed for greater involvement of the littoral states in the implementation of the Integrated National Security and Waterways Protection Infrastructure – also called the Deep Blue Project. The security scheme, which is domiciled in NIMASA and being executed in conjunction with the Nigerian Armed Forces and other security agencies, aims to check piracy and armed robbery in Nigeria’s waters up to the Gulf of Guinea.

The NIMASA Director General had visited many of the eight littoral states to seek more participation from them in the Blue Economy initiative and the Deep Blue Project. He urged them to set up committees to work with the Agency in the execution of the economic and security plans.

Addressing the governor and members of his cabinet in the exco chamber, Jamoh appealed to the Rivers State government to set up a committee to work with the Agency to identify the state’s areas of comparative advantage in harnessing its vast ocean resources. He told his host, “The Agency commenced the issue of Blue Economy to ensure that we have something that we will fall back on. Let us give ourselves at least within the next 10 years, so we can develop our ocean resources.”

The DG appreciated Wike’s effort in rebuilding Rivers State into reckoning with tremendous investment in infrastructure, health, education, and the judiciary that had bettered the lives of the people.

Responding, Wike commended Jamoh for the new initiative of harnessing ocean resources to serve as an alternative revenue source that would end the mono-economy status of Nigeria. He said, “Let me commend the DG for taking the bull by the horns; by coming to visit, regardless of whoever appointed you, to do the right thing.

“Let me thank you as one of those who have looked into the future that Nigeria cannot continue to depend solely on one product and that is oil. There comes a time that the wells will dry up, and when the wells are dried, what is the alternative? Is it at that time we will begin to seek for an alternative? So you are on the right track by identifying that we should go for the blue economy.”

The governor pledged to partner with NIMASA in the area of human capital development and proposed the adoption of Government Sea School, Isaka, in Okrika Local Government Area, as an institution for seafarers’ training.

“This will help the industry and create a lot of manpower for our people and employment,” he said.

Wike requested for the return of the Agency’s Cabotage Department, which had earlier been moved to Lagos, to Rivers State. He said his administration had procured gunboats for the security agencies, particularly, the Nigeria Police and Nigerian Navy, to assist them to ensure security on the waterways and boost the business activities in the maritime environment.

Jamoh had visited Bayelsa, Lagos, Delta, and Ondo states in his effort to mobilise the littoral states and their governments to participate in the Blue Economy and Deep Blue Project.