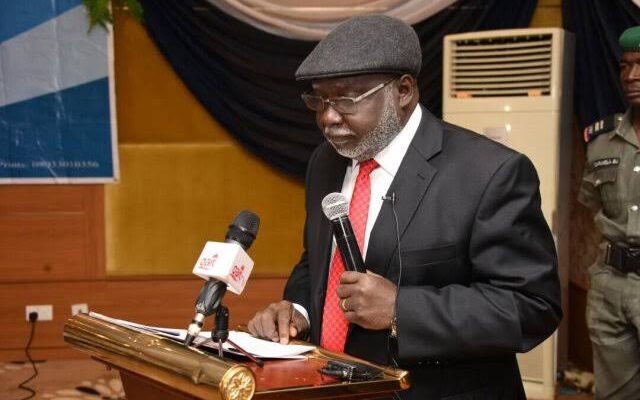 The Chief Justice of Nigeria (CJN) Justice Olukayode Ariwoola, on Friday assured that the judiciary under his watch, would always uphold the rule of law and supremacy of the constitution.

Ariwoola made the remark during the inauguration of the Federal Judicial Service Commission Liaison Office and the Justice Mary Odili Judicial Institute, built by Gov. Nyesom Wike’s administration.

Ariwoola, who inaugurated the facilities, said that Judiciary under his watch, would strictly adhere to all binding court orders to protect the lives of citizens against any form of oppression, suppression or repression by anybody in whatever position.

He commended Gov. Nyesom Wike of Rivers for his sincere efforts and giant strides in all the federal and state projects he constructed in the Judiciary for the good of the country.

“I heartily commend and eulogies your sincere efforts and urge you to keep the lofty passion aglow for the ultimate good of Rivers State Judiciary and by extension, the Nigerian judiciary.

“I need no one to tell me that this is indeed an uncommon faith, especially in this our clan where a thick wall of demacation is often deliberately erected to separate the state projects from federal projects.

“I make bold to say that Rivers State occupies an enviable position among the comity of states that are vividly passionate and unbeat by the welfare and comfort of their respective judiciaries,” he said.

He said that Wike had been one of those lawyers in position of authority that relentlessly learnt voices to the growth, progress and prosperity of Nigerian judiciary, especially the seamless administration of justice at all levels.

“We sincerely appreciate Your Excellency’s inestimable projects and urged other state governors to take a queue from you because good deed has to be publicly acknowledged and publicly adopted as well.

“The Justice Mary Peter Odili Judicial Institute will always remain the major reference point in the training and retraining of judicial officers and administrators in Nigeria and beyond,” he said.

Wike said N500 million would be granted immediately to the institute to start work before they would be included in the 2023 budget.

Wike said that the aim of constructing the institution was to ensure that judiciary officers and their supporting staff would be trained often.

“If Nigerian Government is practising true federalism and not in theory, there is nothing wrong for state government to train their Judges, Magistrate and lawyers and also cut cost for travelling to Abuja for training,” he said.

Wike said he would seek for amendment to include the new judiciary institute in the 2023 budget, so that the institution could work effectively.

Justice Mary Odili, retired Supreme Court Judge, prayed that the Almighty God would adequately reward Gov. Wike for all the sacrifices of love shown to her, the people of Rivers and Nigeria at large.

Odili said the Governor had given her the honour of naming the institute after her name, with the content of what it represented. “

She said that she would take the opportunity to deliver the first lecture at the institute. Odili urged both young and old judges, magistrates and lawyers to hold unto the will of God Almighty, saying that there was a lot of hope for Nigeria’s Judiciary.