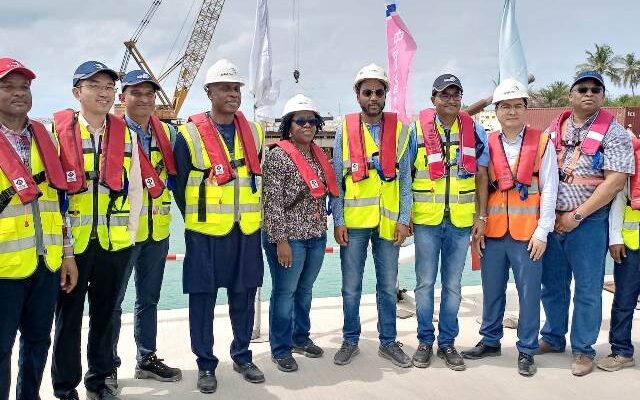 MINA Blog- Nigeria’s Minister of Transportation, Rotimi Amaechi, while inspecting the Lekki Deep Seaport project in Lagos State on Saturday in Lagos, said it was a huge achievement for the President Muhammadu Buhari’s led administration.

According to the minister, ”As a layman I cannot talk in terms of percentage. I can only say that I am impressed compared to the last time we came here.

”I am being told by the management that by June, they are expecting cranes and by September, like we agreed, they should commence commercial activities, I am happy.

”This is a privately funded project, over time they will collect their revenue from commercial activities before they hand over to the Federal Government through NPA.

”Obviously taxes will be collected here, even them, they will pay taxes.

”I doubt there is tax exemption, so we will collect taxes and I must say that the confidence in giving them the project is because of the taxes that we will collect.”

On contribution of the port to GDP, Amaechi said it would contribute about 360billion dollars, which is not even enough to accomplish what is needed.

He said: ”the growth of the economy will put pressure on the expansion of the project.

”The argument we have in cabinet is that, the need for Lekki is as a result of the fact that the demand for port activities have exceeded the supply of Tin Can and Apapa ports around Lagos.

”We have more ports than the country needs for now because manufacturing is a big problem in Nigeria coupled with the fact that this is the first seaport in Nigeria.

”Right here you have 16.5meters drought which is good for the country but the country needs more than just one.

”This is because they no longer manufacture those 11meters vessels, they now go between 16meters and above. So, we need just more than Lagos deep seaport.

”And I think that is why for me, before I leave office I will emphasise on the construction of the Bonny deep Sea port.”

The minister explained that the project, when completed would create more economic activities and jobs for teeming youths among other things.

Amaechi stated that measures were in place to ensure the ports were automated and of international standard.

On rail, Amaechi reiterated the need for a rail system that would convey both liquid and dry cargoes out of lagos through the ports, saying if this was not done there would be problem.

The minister also said that there was need for extension of the land to enable completion of the project and urged the Nigerian Ports Authority (NPA) to discuss with the Lagos State government on the issue.

On his part, the Managing Director, NPA, Mohammed Koko, said the authority would continue to work to ensure the realisation of the project.

”So this is a port that is private and automated but NPA will also carry out its responsibilities,” Koko said.

The Lekki Deep Seaport Port, which is being constructed on a 90 hectares of land is based on build, own, operate and transfer arrangement.

It is also expected to have 16.5 meters draught, which is the deepest in Nigeria, and a projected capacity of 2.7 million twenty-foot equivalent units of containers per annum.