The Managing Director of Nigeria LNG Limited (NLNG), Engr. Tony Attah has said the large deposit of gas resources in Nigeria would amount to nothing if the gas is not developed and utilised urgently to meet the nation’s energy needs.

Engr. Attah said this at the pre-summit conference of the 2021 Nigeria International Petroleum Summit (NIPS) organised by the Federal Ministry of Petroleum Resources and sponsored by NLNG.

He stated that it was necessary to act now on gas through deliberate policies such as the Decade of Gas. He added that the country must not continue to be gas-rich and energy-poor where our gas processing and LNG capacity do not match the volume of our gas reserves.

Engr. Attah, however, emphasised that the time for Nigeria to become a top gas nation is now when gas is playing a pivotal role in bridging traditional energy sources and renewables.

“Our world is changing. We are set to add two billion more people by 2040 to become 9 billion people on earth. On the back of this and anticipated growth in human prosperity, energy demand is expected to grow by more than 30%.Essentially the world needs more energy; but needs it cleaner and cheaper to manage climate change and the 20C challenge through decarbonisation.

“Energy transition has begun, resulting in massive change in the global energy mix while renewable sources are gaining prominence to replace coal and other forms of fossil fuels.

Gas is set to be the fastest growing transition fuel of the future. This is a great opportunity for Nigeria. Nigeria is blessed with plenty gas reserves – 200TCF of proved reserve and an additional 600TCF scope to be proven by SEC rules.

“Proving the 600TCF will move us to number four in the world from the current 9th position which I believe should be a key objective for this decade of gas agenda. Essentially, Nigeria is a gas nation as we have more gas than oil on a BoE basis.

“Nigeria currently plays a significant role in the global energy sector, holding the position of the largest oil and gas producer in Africa and the sixth supplier of global LNG through the operations of NLNG. Our Train 7 project alone will attract about $10billion into the country with significant revenue generation for government and our shareholders but also over 12,000 jobs opportunity for Nigerians.

“This is a decade of gas, another decade of sustained operations in NLNG, a decade of Train 7 and perhaps Trains 8,9 and 10; a decade of elimination of gas flaring, a decade of more Domestic LPG in households in Nigeria; and overall, a decade of fully gas-powered economy,” he said.

He added that “Gas is everything for Nigeria. We must use what we have to get what we want. Saudi Arabia and Dubai used oil to move their economies to becoming one of the best in the world, Qatar has used gas to transform from a fishing economy to becoming a global gas giant. Nigeria has both oil and gas. However, Nigeria has thus far ridden on the back of oil for over 50 years, but the time has come for Nigeria to fly on the wings of gas. At NLNG, we believe It is time for GAS.”

Engr. Attah urged the Federal Government and stakeholders in the energy industry to maximise the Decade of Gas by focussing on developing and legislating the right regulations, policies, and laws that will engender the right environment for the much-needed investment in all the streams of the sector.

Engr. Attah added that NLNG was ready to partner with the government in making the Decade of Gas a reality as the Company continues to actualise its vision as a global LNG company, helping to build a better Nigeria.

Why we are promoting modular refineries, new ... 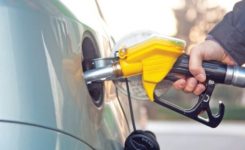