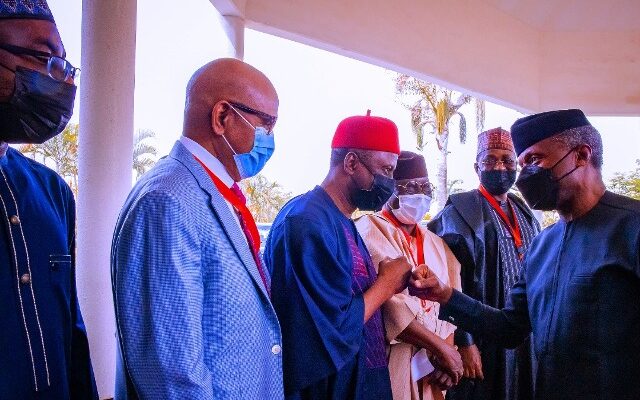 Public office is an instrument of service and responsibility to the people and should not be synonymous with the accumulation of power, privilege and wealth.

This was the submission of Vice President Yemi Osinbajo, SAN, at the All Progressives Congress (APC) Professionals Forum’s Conference, which held today at the old Statehouse Banquet Hall, Abuja.

According to the Vice President, professionals interested in politics and nation-building must turn the tide where “holding public office in Nigeria at any level is largely perceived as synonymous with the accumulation of power, privilege and wealth.”

He added that the professionals that would shape the country’s future in one way or the other are those that have the “understanding that public office is an instrument of service and responsibility to the people.”

The Vice President also observed that Nigerians must break the paradox of individual genius and collective underperformance, especially as the country has “many gifted, accomplished and remarkable individuals across all walks of life all over the world.”

“There is a clear mismatch between our individual quality and our national outcomes. We have not yet become greater than the sum of our individual selves,” the VP said.

In his view, the needed synergy between living up to the merits of professional calling and dedication to public service will produce the desired national impact.

“While it is true that we have several excellent individuals in various spheres of society, we must recognize that success in a country such as ours can no longer be defined in personal or individual terms…True progress is about reimagining our collective circumstances and creating an environment that enables prosperity for us all.”

Prof. Osinbajo stated that professionals in politics must also see beyond tribal, religious and other sentiments if they truly want to make significant impact in national development.

“There is no point in having professionals in politics if the professionals are driven by ethnic, religious and other parochial considerations. Because the whole point of professionalism is that you are defined by merit, by your professional acumen.

“The usefulness of professionals in politics is that you have people who are used to being assessed on the basis of their own achievements and who are unafraid to make competence the first advertorial of their acumen. In other words, professionals emphasize the role of merit in public life.”

He noted that an important advantage of having professionals in politics is lost “if we do not recognize that our role as merit-driven persons must be to fight the temptation of ethnic, religious and other parochial considerations in making the crucial decisions for the development of our nation.”

To further buttress his point, the VP said that: “nobody would place their lives in the hands of an incompetent doctor because they share the same faith or continue to patronize a dangerously inept auto-mechanic because they belong to the same tribe.”

This is why Nigerians must also especially refuse to be swayed by those whose sole argument for power is an appeal to sectional sentiments, the VP added.

“We must resist it and we must say “no” to it; otherwise, we fail in our professional calling,” he emphasized.

It is this common good that professionals, who are the elite in a poor society, must seek to pursue in their calling, the VP stated.

In his words, “the privileged or the elite, both individually and collectively, have a responsibility, an obligation to society to plan, organise, order or reorder it, and, above all, to make sacrifices for the maximum benefit of all.”

In what he termed as ‘the burden of privilege,’ the VP noted that “It is our expected role to find common cause across professions, vocations, ethnicities and faiths defining the minimum terms and conditions for the safety, security, growth and prosperity of our communities.

“It is the elite that define clearly what is lofty, noble, and deserving of honour, and how these values can be sustained, preserved and enforced.”

This obligation is a major reason why the Buhari administration is focused on the welfare of the common man, the VP stated, adding that the ruling APC developed its manifesto with that in mind.

He said, “It is indisputable that the heart and soul of the APC was and remains essentially Left of centre. In other words, a party committed, devoted to the common man.

“Our presidential candidate then, now President Muhammadu Buhari, was a product of the firm will of common man, not the product of an elite consensus. And despite elite collaboration or conspiracy, he repeatedly won elections and, at least, was able to deliver significant votes in every election since 2003.”

The Vice President highlighted how the APC developed and started the implementation of the largest social investment policy in Africa.

The VP further said that the Administration’s Social Investment Programmes, SIPs, has continued to feed over 9.5 million children in public schools daily, providing jobs for over 500,000 Nigerian graduates through the N-Power scheme, as well as microcredit loans for farmers, petty traders and ordinary Nigerians,

“Our opponents who are on the Right would argue that, “why are you giving money, why are you giving small loans to these people?” But they do not argue that in this same country, over N5 trillion is what a couple hundreds of Nigerians owed banks before AMCON was created. But we spent just N20 billion on 2 million Nigerians – traders and farmers etc, in providing them with micro-credits.”

Prof. Osinbajo disclosed that despite the challenges of overcoming two recessions and the COVID-19 global pandemic, the Buhari government, through its economic and social investment policies, has continued to ramp up its efforts in providing solutions to improving the economy and wellbeing of Nigerians.

Such policies include the Economic Recovery and Growth Plan, the Economic Sustainability Plan, Ease of Doing business innovations and now the National Development Plan, which “focuses on value addition, across all sectors including agriculture, manufacturing, solid minerals, digital services, tourism, hospitality, sports, entertainment.”

The VP also noted the important role of technology in the development plan, even as he disclosed that “since 2016 Nigeria has developed 6 unicorns tech companies worth over one billion dollars.

“We believe that we can leverage technology and innovation to create the millions of jobs and opportunities which we would require now and in the coming years,” he said.

He added, “The President has promised to move 100 million people out of poverty within a decade, to provide good paying jobs for the largest number of Africans under the age of 30.

“We must educate millions of children, provide good healthcare for millions and a public health system robust enough to handle pandemics when they occur.”

Prof. Osinbajo also highlighted the efforts of the Buhari administration in addressing security challenges, noting that it remains committed to “ridding our nation of terrorism and gang criminality.”

Present at the conference were some members of the Federal Executive Council, APC Chieftains, and leaders of the APC Professional Forum led by former Bauchi State Governor, Mallam Isa Yuguda.