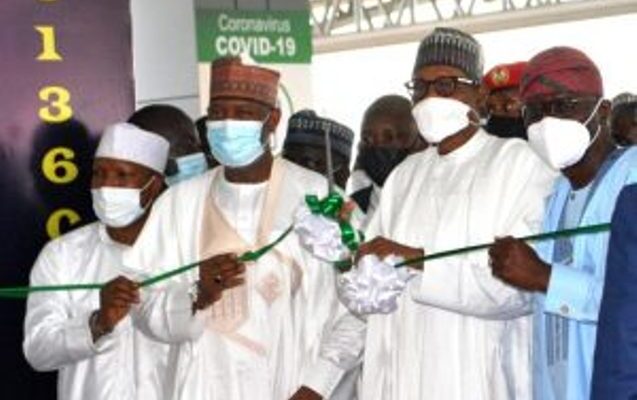 Buhari gave the directive at the Murtala Muhammed International Airport (MMIA), Lagos, during the inauguration of the new terminal constructed by the China Civil Engineering and Construction Company (CCECC).

The President also ordered Mrs Zainab Ahmed, the Minister of Finance, Budget and National Planning, to source for funds for the immediate construction of a second runway at the Nmadi Azikwe International Airport, Abuja.

Buhari also directed the Ministry of Finance to work with the Aviation Ministry in ensuring the delivery of the two projects.

According to him, the concessioning of the four terminals; Lagos, Kano, Port Harcourt and Abuja would further propel development to the sector and grow the country’s economy.

Besides, Buhari lauded the Ministry of Aviation and the Federal Airports Authority of Nigeria (FAAN), for the completion of the new terminal.

Buhari, specifically, said that the new terminal would create additional 3,000 direct and indirect jobs, while the sector’s contributions to the Gross Domestic Product (GDP), would further be enhanced.

He said: “This event showcases our strong commitment to the growth of the Nigerian economy despite the challenges of finance facing the country.

”The commitment of this administration includes: agriculture, aviation and infrastructure development, among others.

“Our aviation road map developed in 2016 has been consistent with infrastructural development.

”We have designated Lagos, Abuja, Port Harcourt and Kano airports as free trade zones, while we have also removed Valued Added Tax (VAT), from air transport.”

In his speech, Sirika said that the inauguration was a testament to the fact that President Buhari meant real business for the aviation industry.

Sirika insisted that the aviation industry remained the only way by which the 2063 agenda of the African Union (AU), could be realised.

The minister declared that one of the aims of the ministry was to grow aviation contributions to the GDP from its present 0.06 per cent to five per cent, at $4.7 billion, in the next few years.

He explained that there would be air-rail connectivity between the domestic and international airports, to shorten the traffic time between both terminals.

Sirika mentioned foreign exchange and Jet-A1 as some of the challenges confronting the aviation industry, lamenting that these had led to numerous setbacks for the sector.

He appealed to Buhari to direct the Nigerian National Petroleum Corporation (NNPC), to import Jet fuel in good quantity for operators in the industry.

“It is pertinent to mention that we stand to gain significant benefits in restoring and maintaining connectivity within, to and from the country.

”N535 billion expenditure from visitors will be solely generated from restoring and maintaining this connectivity.

“Consequently, Sir, these are the numbers at risk if that connectivity is threatened by the continuous travel restrictions due to current pandemic.

“Mr President, aviation business suffers from issue of access to foreign exchange by local and foreign airlines and the ability to repatriate blocked funds.

“Nigeria currently holds $283 million of foreign airlines’ funds blocked in the country. I would like to humbly request the support of the Central Bank, through the directive of Mr President.

”This is to prioritise access to forex for all carriers, both local and foreign and to work out a mechanism to clear the existing backlog urgently and prevent subsequent build up, ” he added.

”The rest are six passenger boarding bridges, out of which two had already been installed, two food courts, four premium lounges and 22 guest rooms and spa.

He said that CCECC had commenced the construction of four new terminals at Lagos, Abuja, Kano and Port Harcourt airports in 2013, with completion periods fixed for 20 months.

Sanwo-Olu noted that the three projects inagurated on Tuesday; Fertiliser, Lekki refinery and the new terminal would change the status of the country.

He explained that activities of Buhari would not only create jobs for the teeming populace, but also open up the country for foreign investments and opportunities.

Sanwo-Olu said that the new Lagos terminal has the capacity to process 14 million passengers per annum and built on a land mass of approximately 56,000 square metres, with 66 check-in counters.

The Lagos State Government and Federal Airport Aviation of Nigeria (FAAN), had signed a Memorandum of Understanding (MoU), on the 9kms Airport-Shasha-Alimosho link road.