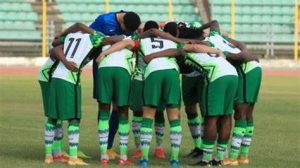 The Super Eagles of Nigeria are back in Lagos after confirming qualification for the next African Cup of Nations scheduled to hold in Cameroon between January and February 2022. They are set to face Lesotho at the Teslim Balogun Stadium on Tuesday in formality game.

The three-time African champions will be making their 19th appearance on the Afcon stage next year after confirming their spot as Group L leaders with a 1-0 victory over Benin on Saturday.

Their win in Porto-Novo consolidated their dominance in their group. Paul Onuachu’s stoppage-time header made the difference for the Nigerian side at Stade Charles de Gaulle which condemned the Squirrels to their first home defeat since June 2013. A goal in the dying minutes gifts the visitors all three points.

The team on Sunday came in through the Lagos State Waterways Authority boat.

Nigeria would be hoping to finish their Group L qualification campaign with a befitting victory to mark their much awaited return to the Centre of Excellence.

In the reverse fixture played at the Setsoto Stadium, the Super Eagle claimed a 4-2 win in Maseru – with Napoli’s Victor Osimhen netting a brace while Villareal’s Samuel Chukwueze and Everton’s Alex Iwobi were also on target.