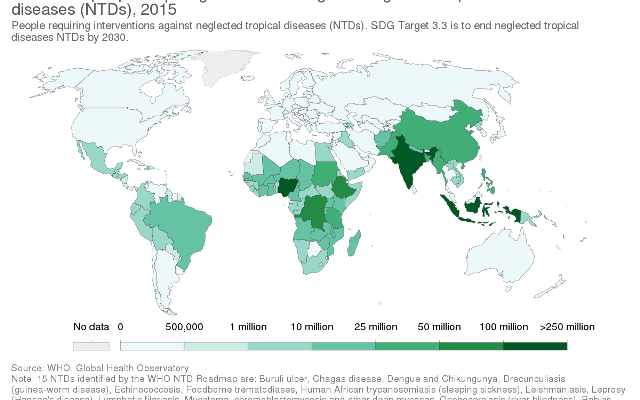 MINA Blog- With no fewer than 122 million Nigerians at risk of been infected with National Tropical Diseases (NTDs), health officials have urged government at all level to release a proportion (0.05%) of the total budget annually to implement critical activities that will fast track elimination of NTD in the country.

The NTDs are conditions that are common in tropical or sub-tropical regions due to poverty, poor sanitation, lack of safe water resources, substandard housing conditions, and deficient health acres access among others.

Nigeria is believed to be battling with 15 out of 20 NTDs listed by the World Health Organisation (WHO).

Speaking at a two day media dialogue in Port Harcourt, National Coordinator, Neglected Tropical Disease Elimination Program of Federal Ministry of Health, Dr. Nse Akpan said the government will not succeed alone  to eliminate NTDs if all hands are not on  deck, and that the three tiers of government, LGAs States, FG, and the communities must be involved.

He noted that “neglected tropical diseases are a group of preventable and treatable diseases that could be caused by viruses, bacteria, protozoa that affect 1.5 billion people – 40% of whom live in Africa. The diseases aﬀect the poorest, most vulnerable people who live in hard to reach parts of Africa.

“They disfigure, disable, and keep children out of school and parents out of work – limiting their potentials and leave communities stuck in poverty.”

He said Community involvement had to do with stopping overcrowding, leaving in dirty environment, we should walk toward having safe water supply. By the time we start these you will see that we are able to eliminate NTDs”.

UNICEF Representative and WASH specialist Bioye Ogunjobi, said the agency was currently supporting 12 states by funding mass administration of medicine, distribution of medicine to those who are affected for treatment.

“We have also been supporting WASH NTDs integration that is promoting safe sanitation practices in endemic communities because we have discovered that most of the NTDs are WASH related.

“So we have brought media practitioners here to start doing report on NTDs that will create awareness among the Nigeria populace, but more importantly, we want the policy makers to understand why they need to invest in NTDs control intervention. In most of the states, the NTDs team does not have any fund for any activity, so we want this to changes, unless this changes, we might not be able to eliminate the NTDs.

“For instance, there are some of the states we have supported that require evaluation, especially epidemiological  evaluation, that will show if they still need to be given drugs for treatment. If this states are evaluated and they are successful, it means treatment will stop and that is a step towards the elimination of the diseases “.

Geoffrey Njoku, Communication Specialist, UNICEF, informed that the purpose of the dialogue was to change the narrative and perception on NTDs, close communication gap that exists in communities and create more awareness around it.

He added that the dialogue was expected to get the media better informed and better equipped with the right and appropriate messages to reduce incidence of morbidity and mortality from the disease.