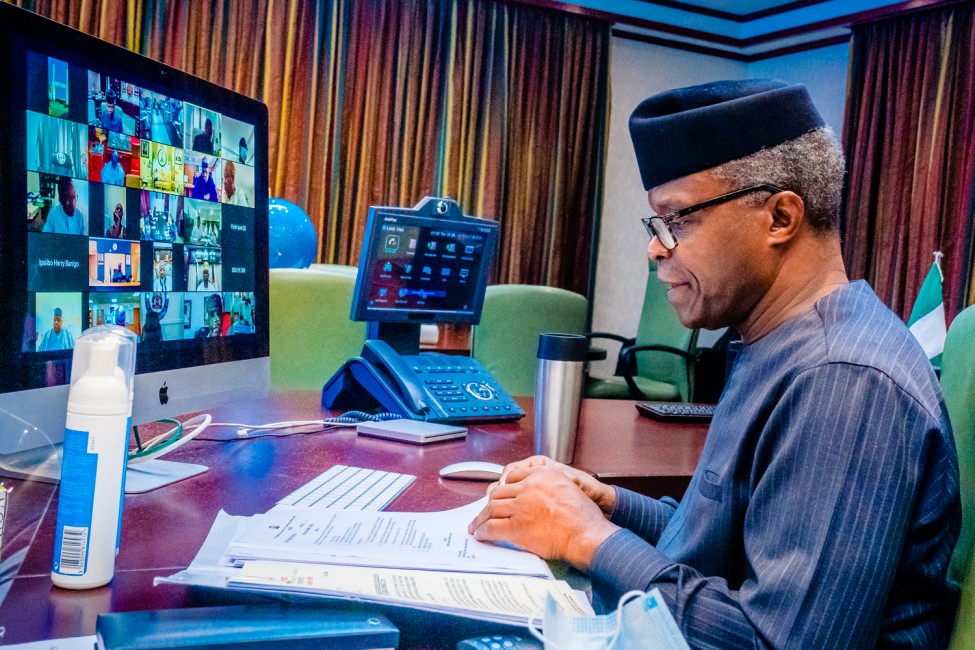 “Much of the global investment in clean energy will need to go into Africa. However, instead of prioritizing efforts to redirect global capital to our nations, efforts are currently underway to limit the development of gas projects in Africa, violating the principles of equity and justice enshrined in global agreements”, according to Vice President Yemi Osinbajo, SAN.

He made this submission while speaking during a virtual conference themed: Climate, Conflict, and Demography in Africa jointly hosted by the International Crisis Group, the Royal African Society, and African Confidential publications earlier today.

In the past, Prof. Osinbajo had at different forums, raised the issue of financing of gas projects in developing countries, like Nigeria, advocating for a just transition and more effective engagements towards the target of Net-Zero Emission by 2050.

At a meeting held earlier in February with the British Member of Parliament and COP26 President-Designate, Mr. Alok Sharma, Prof. Osinbajo restated Nigeria’s support and commitment to the Climate Change agreement but cited the planned restrictions on financing of gas projects in African countries as a potential setback.

Also, in March this year, at a meeting with a delegation from the European Union (EU) led by its Executive Vice President, Mr. Valdis Dombrovskis, the VP reaffirmed Nigeria’s commitment to the global green energy initiative but called for a just transition to zero-emission.

Speaking at the virtual event today, Prof Osinbajo explained the necessity of gas in developing nations, “because the role of gas as a bridge fuel, to increase the share of renewable energy in the energy mix, and rapidly transition away from firewood-based cooking fuel to natural gas-based cooking, yields both environmental and health benefits.

The Vice President emphasized that despite Africa’s contribution to climate change being negligible, “we continue to be the most adversely impacted by climate change, so much so that public resources that could help modernize the energy mix has to be redirected towards adaptation spending.

“But worse, we are being compelled to make disproportionately huge sacrifices as the wealthier countries continue full speed on defunding gas projects and insisting that gas projects must be defunded as an important component of the drive towards net-zero emissions by 2030.”

Regarding the amount of investments required in clean electricity – generation and grid storage infrastructure, Prof Osinbajo stated that to get the world on track for net-zero emissions by 2050, it will cost more than US$1.6 trillion per year by 2030. “This is over four times more than what was invested in these sectors in 2020. In regions like Africa, installed electricity capacity will need to double by 2030 and increase at least five-fold by 2050,” he said.

Giving reasons for his argument against defunding gas projects, Prof Osinbajo said, “our first obligation will always be to ensure the wellbeing of our people, through access to development services including electricity, healthcare, education, safe jobs, and a safe environment, including access to clean cooking fuels.

“We must prioritize solutions that align with development and climate agendas, this is absolutely important. The global climate conversation can only be equitable and inclusive by putting all people in all geographies at the heart of the endeavor to save the planet.”

In the same vein, the VP mentioned the need to “recognize and plan for growing energy demand; its increase will be critical for driving growth, jobs and economy-wide progress, and delivering healthcare and education services. Efforts are already underway in my country, Nigeria, and in several countries across the continent to transition to large shares of clean energy sources to do so.”

In attendance at the virtual event were the Minister of Environment for Ghana, Dr. Kwaku Afriyie, who represented the President of Ghana; Chairperson of the Royal African Society, Ms. Arunma Oteh; Patrick Smith, Publisher of African Confidential, and the event was moderated by Bola Mosuro.