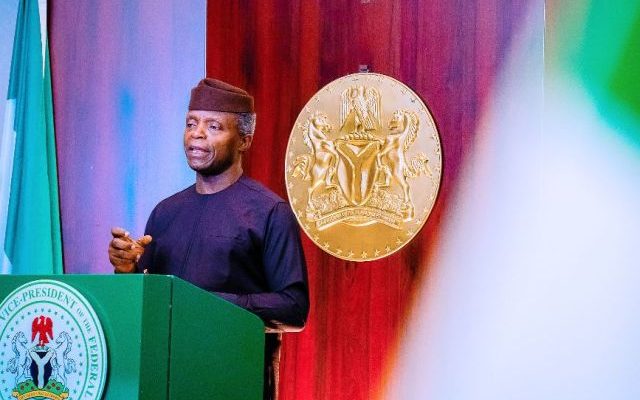 Nigeria is glad that the Biden administration is fully back on board the Climate Change global agenda, in a commendable restoration of the US government’s support for the Paris Agreement, according to Vice President Yemi Osinbajo, SAN.

Prof. Osinbajo stated this yesterday when he received at the Presidential Villa, Abuja, a US government delegation led by the White House Deputy National Security Advisor, Mr. Jonathan Finer, who is currently visiting Nigeria.

According to Prof. Osinbajo, “we are happy that the US is fully on board with climate change and back to the table on this issue. I think one has to commend the drive that this US administration has put behind climate change.”

Reiterating Nigeria’s position regarding a just transition from fossil fuels to clean energy, ahead of the Net-zero Emissions 2050 target, the VP made the point that “we are concerned, amongst other things, first about some of what has been going on, especially around gas as an effective transition fuel, and how many of the Development Finance Institutions (DFIs) and some countries are insisting that gas projects should be defunded.

“This is a principal concern to us; it is one that we have made central to our advocacy and it is one of the issues that we intend to promote at the COP26.”

He then informed the US delegation of Nigeria’s Energy Transition Plan, which is the first in Africa.

We have done the costing for it and all of what is required to be able to hit net-zero by 2050. Also, what the implications would be, given the constraints there, and how realistic it would be to get to net-zero by 2050 or not,” the VP added.

Regarding the Democracy Summit President Joe Biden would be hosting later in the year, the VP stated that Nigeria looked forward to participating at the summit.

The Vice President also noted that “one of the things we have always spoken about is how to ensure that illicit financial flows are discouraged,” while adding that the international monetary and financial systems have a role in stopping it.

“Looking at what happened in the last few years, we have received quite a bit of support from the US government, especially in terms of the repatriation of several of the looted funds, and we hope to continue to get the cooperation of the US.”

The Vice President further spoke on the security concerns in relation to the activities of ISWAP and ISIS. He recognized the role of the Global Coalition to Defeat ISIS (D-ISIS) as a “very important initiative” sending the “right signals, especially in Iraq and Syria.”

According to him, “if you look at what is going on today in certain regions like the Lake Chad and the Sahel, it is very apparent that we need that kind of resolve in order to be able to deal with ISWAP and Boko Haram in Nigeria.”

Prof. Osinbajo took the opportunity to express the gratitude of the Federal Government to the US government for donating over 3.5 million doses of COVID-19 vaccines to Nigeria.

Earlier, Finer informed the VP of a potential partnership with Nigeria on a G-7 Infrastructure Programme – Build Back Better World, which the US President has made a priority.

“It involves bringing together a range of funding sources, development finance and private sector to work with key partner-countries to develop their infrastructure and fill the gap between infrastructure needs and the current state of infrastructure,” he said.

Also in attendance at the meeting were the American Ambassador to Nigeria, Mary Beth Leonard; the Nigerian National Security Advisor, Major General Babagana Monguno (Rtd); and other US and Nigerian senior government officials.