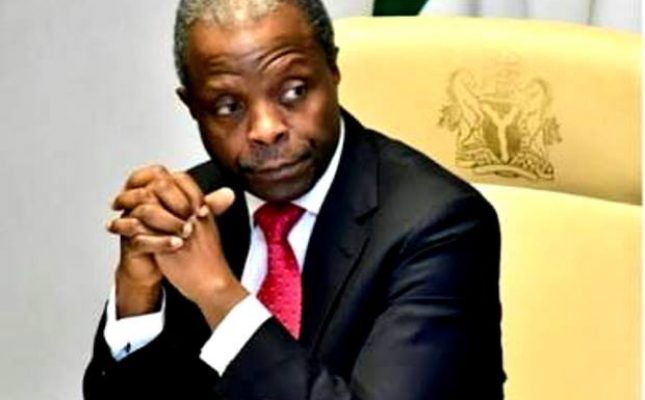 Participating in the carbon market would not only offer Nigeria and Africa the opportunity for growth, industrialization and job creation for its teeming population, it would also provide the right incentives for clean energy and climate action, according to Vice President Yemi Osinbajo, SAN.

According to him, the Carbon Market pipeline could create 30 million jobs in the next decade, with the potential to create more than 100 million jobs through climate aligned projects by 2050.

The Vice President stated this yesterday in his keynote address at a high-level international meeting on Africa Carbon Market Initiative (ACMI) hosted by the Rockefeller Foundation in New York City, USA., where he stressed the importance of building the carbon markets architecture in Africa.

Speaking to an audience, which includes the US Special Presidential Envoy for Climate, John Kerry, who joined the meeting virtually, Vice President Osinbajo stated that “participating in the carbon market offers Africa the opportunity to pursue growth, industrialization, economic value creation, with the right incentives for clean energy and climate action.”

The meeting explored potential opportunities which carbon markets offer to generate resources for clean energy transitions while accelerating economic growth in Nigeria and other African countries.

Members of the Committee include the Nigerian Vice President, former President of Colombia, Ivan Duque Marquez, officials of the United Nations, United States Agency for International Development, USAID; Gates Foundation among others.

Also, President Muhammadu Buhari had announced “Nigeria’s commitment to net-zero by 2060 on the basis of a detailed Energy Transition Plan (ETP),” in his COP26 statement, while at COP27, Nigeria’s Minister of Environment, Mohammed Hassan Abdullahi, delivered the President’s speech on the need for more funding for energy transitions and climate action, and why Nigeria is championing the development of the African carbon market initiative.”

Against the backdrop of global rapid expansion of the carbon markets, the Vice President noted that “Africa currently only has a small share of this carbon market, but the current market can be scaled in a massive way – to reach FDI of $120 billion to $200 billion dollars annually. For a continent that needs $240 billion dollars annually in mitigation investment alone, this carbon finance stream could be the difference between transitioning and not (transitioning).”

Emphasizing the market’s benefits for the African continent at the Rockefeller Foundation meeting, the VP said the “combination of capital flows, job creation, and avoidance of long-term climate destruction” are critical drivers of the interest of African leaders in supporting this effort.

“As all of us in this room understand well, the priorities of the African continent are not just to act decisively on the climate crisis, but to also create significant growth opportunities for our young and growing population.”

On the challenge of funding, Prof. Osinbajo noted that “the investment required to advance the energy transition in Africa is huge. World Bank estimates suggest that Africa needs $6.5 trillion US dollars between now and 2050 for mitigation action alone to keep temperatures below 2 degrees of warming.”

Lauding the positive Pan-African efforts at developing Carbon markets on the continent, the VP noted that the “rapid progress recorded in Africa benefitted from the support of a very engaged Steering Committee with President Duque, the UN, Global Energy Alliance for People and Planet (GEAPP), USAID, and a range of other public and private actors, which resulted in the successful launch in Sharm-el-Sheikh COP-27.

“The strong commitment and presence from fellow African leaders demonstrate the willingness and leadership of Africa. We already have 7 African countries (Burundi, Gabon, Kenya, Malawi, Mozambique, Nigeria and Togo) signed up to develop country carbon activation plans and over $200 million in Advanced Market Commitments – which we must continue to further advance as this is going to be the critical driver of action on the Continent.”

Prof. Osinbajo then commended the support and assistance on the progress recorded so far on the African Carbon Market Initiative, including from the US government, relevant UN bodies and other international organisations like the Rockefeller Foundation, and GEAPP.

He added, “I think it’s an auspicious moment for Africa to be participating more fully in the global carbon market conversation, especially in the light of the slowing pace of green investment flows into the continent.

“The work several of us have done together in the past few months, makes it clear that while other sources of flows are slowing down globally Carbon Markets are growing rapidly.”

The Vice President further observed that other initiatives demonstrate that there is growing acknowledgement of the role of carbon finance.

According to him, “One of the strong points of ACMI and the way we must structure it going forward, in terms of governance, is the flexibility to smoothly work with other initiatives, and there will be many others.

Continuing, he said, “the key really in the brave new world of energy transition initiatives is collaboration, and synergies. I look forward to speaking to Senator Kerry and aligning our efforts – especially on power sector credits, which will be central to keeping up and delivering on the momentum we’ve worked so hard on.

He noted that the single biggest thing standing in the way of making rapid progress on emission reductions is the absence of money dedicated to the cause.

“And we surely can find that money – which is why today’s meeting is both extremely valuable and timely. We all know that the hard part comes next. We have created energy and excitement, and our collective reputations are on the line,” Prof. Osinbajo stated, while calling on African leaders to “take responsibility to ensure this exciting momentum is maintained, and scaled up.

“Carbon markets will play a critical role in the implementation of this (Energy Transition) Plan – in mobilizing the capital required to move to our net-zero economy-wide trajectory. I want Nigeria to have the first Carbon Markets Activation Plan,” he noted.

“We passed our Climate Change Act, earlier this year, and together with Sustainable Energy for All (SEforALL) and GEAPP have also developed our own net-zero energy transition plan.”

Stating his desired expectation for climate goals to be attained before the next UN Climate Change Conference, he said, “by COP28, we need to be able to show real results. I would propose that by COP28, we should be able to deliver the following five things:

“• At least 5 countries should have developed country activation plans. Nigeria will be one of them;

• We should have Advanced Market Commitments of over USD 1billion,

• We should be developing new projects based on new methodologies and realities of Africa like diesel replacement credits,

• We should be scaling up more than a dozen project developers or carbon credit suppliers as they would be known then,

• And most importantly, by COP28, we should have retired more than 40 million of credits on the continent.”

The Vice President also lauded the commitment of the continent’s partners, including GEAPP, the Rockefeller Foundation and SEforALL.

Expressing his optimism for the future, Prof. Osinbajo said “hopefully we will make more progress in the effort to significantly scale up over the next 24 months. Given the positive benefits of the ACMI, this feels like it should be an easy conversation.”

In his contribution, the US Presidential Envoy on Climate Change, Senator John Kerry, commended the VP for his leadership of the issue of energy transition while recalling his visit with him in Abuja before COP27.

“We are grateful for the leadership of the VP, grateful for the reception you gave me on my visit to Nigeria. I am honoured to share the platform with you on how to move this forward,” Kerry said, referring to the African Carbon Market Initiative and the US’ Energy Transition Accelerator.

He noted that “it is possible to create a high integrity carbon market in a way to address Climate Change and African Development aspirations.”

Senator Kerry observed that the developed world must be able to step up the support on climate crisis and expressed delight that “we are all joined together looking forward to developing the financing.”

In his welcome remarks, President of Rockefeller Foundation, Dr. Rajiv Shah, welcomed the Vice President to the meeting and lauded his commitment to the African carbon markets.

Aside from US Special Presidential Envoy for Climate; and President of Rockefeller Foundation; other participants at the one-day meeting included the CEO of SEforALL, Ms. Damilola Ogunbiyi; CEO, GEAPP, Simon Harford; and Senior Executives at Rockefeller Foundation; US Government and United Nations officials, amongst other industry experts and potential financial partners.